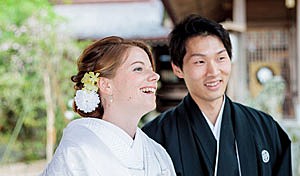 Adeline knew next to nothing about Japan when sent on a business trip, but she instantly felt at home.

This Maine native realised her dream of relocating two years later, moving to Fukuoka, a city on Kyushu island. Having lived in Chile as a child and Beijing for three years as an adult (even braving cycling on the city's swarming streets), making the bold move was just another adventure.

In fact - besides embracing much missed cheese and olives - after seven years outside the US, she's experiencing a kind of reverse culture shock. Hearing English spoken everywhere is still a novelty!

Having led group hikes in Japan, braved tough terrain on bicycle and opened a fitness studio in Fukuoka, Adeline loves being active and getting out and about. Sinking into a Japanese onsen (hot spring bath) overlooking the ocean is one of her fondest memories, and while a long soak never needs an excuse, it seems pretty well deserved after all that.

We're not sure the US can compete with Japan's unique volcanic landscape, but as a city with endless outdoor opportunities and a team who can all speak Japanese, she couldn't be in a better place to soothe that reverse culture shock.

Adeline is part of the following groups: Japan Travel Agents