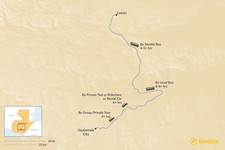 Located in the mountainous Alta Verapaz region in the Guatemalan Central Highlands, it takes over four hours to get to Cobán from Guatemala City, even though it is only 130 miles (212 km) north of the capital.

Guatemala’s fourth biggest city, Cobán is one of the main transport hubs in the Central Highlands. It is also an ideal spot for doing a day trip to Semuc Champey or breaking up the long journey from Antigua, Tikal, Rio Dulce, and Guatemala City. If time allows, though, it’s worth spending a few days exploring the natural beauty of the area.

You can get to Cobán from Guatemala City via private car, shuttle, and local bus. There are also tours that include stops in Cobán or you can also rent your own car and drive yourself, although driving in Guatemala City is not for the faint-hearted.

By Private or Group Tour

The historic city of Cobán is becoming a popular stop-off on the way out to Semuc Champey and a tourist destination in its own right, with waterfalls, cloud forests, orchid gardens, and rural Mayan villages. Joining a tour is one of the easiest ways to get out to the Central Highlands and the best way to experience it properly.

The Guatemala Culture & Outdoor discovery tour is one of our favorites. This 10-day tour showcases the best of Guatemala, taking you from the capital to Cobán, Semuc Champey, Tikal, Rio Dulce, Lake Atitlan, and Antigua.

Alternatively, you can check out this 5-day Guatemalan Adventure.

Private transfer is the most comfortable and convenient way to travel around Guatemala. The long distances can make travel days quite tedious, especially if you are crammed into a bus or a shuttle. With a transfer, your driver will pick you up at your hotel or the airport in Guatemala City and then take you all the way to Cobán, so you can just sit back, relax, and enjoy the view.

By Taxi or Rideshare

It is also possible to take a taxi or Uber to Cobán from Guatemala City (or the airport). If you take a taxi, ensure you agree on a price first. Ridesharing apps are an option but aren’t to be relied on as you may struggle to find a driver to take you that far out of the city. Drivers also cancel bookings and request higher prices once you get in the car.

Taxis or procuring the service of a private car with a driver is generally much more reliable. Bear in mind that the cars in Guatemala can be quite small, so a taxi can be a bit of a squeeze, but is probably still more comfortable than being squashed in the back of a bus for over four hours!

You can also look into renting a car and driving yourself from Guatemala City to Cobán. Once you get out of the crazy city traffic and into the highlands the drive through the mountains and cloud forests is beautiful. Just watch out for runaway chicken buses and ensure you have your international driver's license on hand.

There are plenty of tourist shuttle buses to Cobán from Guatemala City. They have several departures every day and will pick you up from your hotel and drop you at the central bus station in Cobán. You might have to stop halfway to meet the bus coming from the other direction and change buses so each driver only has to drive halfway before returning back to their starting point.

Adventurous travelers might choose to brave the local bus from Guatemala City to Cobán, but we wouldn’t really recommend it. Not only is it not the safest way to travel on the crazy mountainous roads, but it takes much longer and you’ll make a lot of stops along the route.

However, if you really want to experience a ride on a famous Guatemalan ‘chicken’ bus—a colorful old American school bus—then you can head out to the Guatemala City bus station and ask for the buses heading to Cobán. Be prepared for a long, hot, cramped ride, be careful with your belongings, and try not to travel after dark.

How to Get from Antigua to Lake Atitlan

Just under 50 miles (80 km) from Antigua in the Sierra Madre highlands,...

How to Get from Guatemala City to Lake Atitlán

To get from the capital of Guatemala City to Lake Atitlán, you'll have...

How to Get from Lake Atitlan to Semuc Champey

How to Get from Guatemala City to Panajachel

The main transport hub for Lake Atitlán is the bustling town of...

How to Get from Guatemala City to Semuc Champey

How to Get from Antigua to Semuc Champey

Located in the Central Highlands of Guatemala, the tiered turquoise...

How to Get from Antigua to Panajachel

Panajachel, on the northern shores of Lake Atitlán, is the main...

How to Get from Tikal National Park to Semuc Champey

Semuc Champey is one of Guatemala’s most beautiful natural sights. The...

How to Get from Tikal National Park to Guatemala City

How to Get from Lake Atitlan to Tikal National Park

There are a few ways to get from Lake Atitlán to Tikal National Park,...
Getting Around Guatemala

This one-week trip packs in all the highlights of beautiful Guatemala,...

Best of Guatemala and Copan in 2 Weeks - 13 Days

Delve into the incredible natural beauty and diverse cultures of...

On this weeklong journey through Guatemala, explore the sites and...

On this 10-day tour, experience the rich culture and scenic outdoor...

Explore the scenic outdoors on this five-day Guatemalan nature...

Discover Guatemala, the last stronghold of the Mayan civilization, on...

Combining adventure and nature with leisure and culture, this one-week...

Enjoy the best of Guatemala and Honduras' Roatán Island in two weeks on...

J
Jared M.
Virginia, United States
"Eduardo and team provided an exceptional experience during our visit. Everything from transportation to/from the airport to required COVID testing was taken ..." read more
Traveled to Guatemala as a family in December, 2021
A
Ariel S.
Washington, United States
"Eduardo did a great job planning our trip. He was very responsive and very helpful, and made the whole experience very easy. I highly recommend using Eduardo..." read more
Traveled to Guatemala as a couple in December, 2021

Christine H.
Pennsylvania, United States
"This trip was great! I found KimKim through an Internet search and was so excited. I told them a basic outline of what I wanted and they found me someone who..." read more
Traveled to Guatemala solo in December, 2021

Nicolas B.
United Kingdom
"I approached kimkim because I thought they were displaying good values. Eduardo who helped me plan the itinerary was really approachable and responsive. Hi..." read more
Traveled to Guatemala solo in December, 2021

Camille S.
Utah, United States
"Eduardo was amazing! He is very responsive and he planned the best trip we have ever had, and he did it in record time. He truly is the best of the best, and..." read more
Traveled to Guatemala as a family in October, 2021
E
Emily N.
New York, United States
"Eduardo was an absolute sweetheart, an incredible problem solver, and was truly a pleasure to work with. Throughout our experience, we felt so lucky to have..." read more
Traveled to Guatemala as a couple in July, 2021
B
Bryan M.
Minnesota, United States
"I had the pleasure of having Chris as local specialist and Willy as my guide fr=m the company Old Town Outfitters throughout the week from 10/01/2021-17/01/..." read more
Traveled to Guatemala solo in January, 2021

Daisy B.
Canada
"My team of 5 avid hikers hiked 7 volcanoes in 11 days with guides Carlos and Lucas, who went out of their way to make our trip fun, safe, exciting and full o..." read more
Traveled to Guatemala as a group in February, 2020

Alice M.
California, United States
"We just got back from our week-long family trip to Guatemala. We had an incredible time, due in large part to the efforts of Eduardo of kimkim who set us up ..." read more
Traveled to Guatemala as a family in February, 2020
D
David J.
New York, United States
"Diego was really fantastic! There is no way I could have made it up & down Acatenango without him. He is truly an expert , and gave me encouragement and gre..." read more
Traveled to Guatemala solo in January, 2020
Plan your trip to Guatemala
Customize your trip with help from a local travel specialist
Plan Your Trip