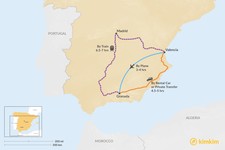 The coastal city of Valencia is located approximately 305 miles (491 km) from Granada, the capital city of the Granada province, located in Andalusia. The fastest way to get from one city to the other would be via plane. Flying time takes about 3.5 hours and most of the flights connect through Palma de Mallorca or Barcelona.

The second fastest route between cities would be by car or private transfer. The drive takes 4.5 - 5 hours and takes you along the coast, with several opportunities to stop and explore the countryside along the way.

Traveling by train would be the slowest option. There are daily departures from Valencia to Granada, but all require at least one transfer. Most of the connections go through Madrid, and you can expect a travel time of 6.5 – 7 hours.

While in Valencia, consider this 9-day itinerary, where you not only get to see Valencia’s City of Arts and Sciences and tour historic landmarks, but also visit Barcelona, where you’ll get the chance to discover the architecture of Antoni Gaudí and enjoy a wine tasting in Montserrat. And this Best of Spain 12-day tour takes you to Barcelona and Madrid, then to Seville and Granada. In Granada, you’ll visit the Alhambra, a 9th century Muslim fortress, and stroll the Generalife Gardens, as well as exploring the city itself.

The Valencia airport is located about 6 miles (10 km) from the city center. Options to get to the airport include taxi, metro line or bus and it will take between 15 – 30 minutes, depending on your mode of travel. There are regular flights to Granada, with most of them requiring at least one transfer, either in Palma de Mallorca or Barcelona. Flying time is between 3 – 4 hours, depending on layovers. Once you land in Granada, it’s about a 15-minute cab ride to the city center, which is located approximately 11 miles (18 km) from the airport.

Leaving Valencia, you’ll get on the V-31 and connect to N-344 and then the A-33 which eventually gets you on the A-92 and into Granada. During the drive, you’ll pass by the city of Murcia, a great place to stop and take a break. You can visit the Murcia Cathedral, the Salzillo Museum, or wander the lovely Plaza de las Flores, where you can get a coffee or a bite to eat.

Valencia has two main rail stations, the Valencia Joaquín Sorolla station and the Estacio del Nord station. Both are located near the city center and are within walking distance of each other. There are daily departures from Joaquín Sorolla to Madrid, and from there you can connect to Granada. Depending on time of day and train speed, as well as layover times, the trip will take from 6.5 – 7 hours. You can buy your tickets in advance or at the station, and most of the trains offer food and drink for purchase.

With a little over two weeks to spare, you can experience the highlights...