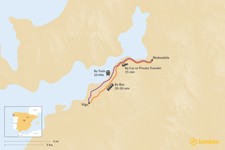 Spain’s northern cities of Vigo and Redondela, both part of the province of Galicia, are approximately 8 miles (14 km) apart. Vigo is located on the northwest coast, next to the Cíes Islands, which are known for exceptional birdlife and beautiful beaches. Redondela is further up the coast, and is very close to Portugal, which makes for an easy side trip if you want to expand your tour of the area.

The fastest way to get from one to the other would be by train, with several daily departures from the Vigo-Guixar rail station and a travel time of about 10 minutes.

Traveling by car or private transfer would be the second fastest option, which takes you along the coast and depending on traffic, is about a 15-minute drive. The drive is a scenic one and the highways are usually in good condition, although you can expect toll roads along the way.

The slowest route between the two cities would be via bus. Bus service takes about 20 – 30 minutes and the bus depot is located about 2.5 miles (4 km) from Vigo’s city center, so depending on where you’re staying, you may also need to take a taxi to the bus station, which would add another 5 - 10 minutes to the trip.

This 15-day Road Trip through Northern Spain offers tours from Madrid to León and then to Vigo, with a visit to the nearby Cíes Islands, then continues on with stops in various cities and ends in Basque country. While in Vigo, you can stroll the town center and Alameda Park, see the historic Castro Fortress, and enjoy some of Spain’s best seafood. Redondela, known as the “Village of the Viaducts” because of the town’s two major railway viaducts that were built in the 19th century, has sights such as Meriande museum and the Convent Vilavella, a monastery from the 16th century.

Vigo Guixar train station has regular daily rail service between Vigo and Redondela. You can purchase tickets in advance or at the station, and travel time is speedy at just 10 minutes. Upon arrival into Redondela, you’ll disembark right at the city center, which makes it convenient to walk or take a taxi to your hotel or room.

Leaving Vigo, you’ll take the AP-9V and connect to N552 which takes you to Redondela, a quick drive of 15 minutes. Along the way, you’ll pass the Vigo zoo, where you can stop in and see some of the animals housed there, or check out their nighttime exhibit that features nocturnal creatures.

Bus service from Vigo to Redondela takes between 20 -30 minutes and there are daily buses departing from Vigo’s bus terminal. Since the main terminal is located a few miles from the city center, you may need to take a taxi from your hotel to the bus stop, which could potentially add another 5 -10 minutes to your travel time. You can purchase bus tickets in advance or at departure, but buying them early is always recommended in order to guarantee your seat.

Spain is so much more than its famous cities. Over two weeks you'll see...

Spain is the perfect country in which to escape for a few days, and...

Even in six days, you can enjoy the highlights of Galicia. This region...

On this 15-day excursion through Spain, you'll take the road less...

On this 16-day road trip, you'll see some beautiful regions of Spain,...

Prepare yourself for the road-trip of a lifetime. Over 11 packed days,...

One week is all you need to embark on the road trip of a lifetime...

The best thing about a road trip in Spain is that you're not only...

Carlo B.
California, United States
"We are so happy with the trip that Marina help plan for us. It was a 2 week tour of Spain which was curated for our family of four - where we wanted to see g..." read more
Traveled to Spain as a family in July, 2022

David M.
Massachusetts, United States
"Our trip to Catalunya was fantastic. Working together with Bea translated into a perfect mix of city culture and relaxing fun on the coast. We absolutely..." read more
Traveled to Spain as a couple in July, 2022

Diana C.
Massachusetts, United States
"We loved our family trip (parents plus 2 twenty-somethings) to Menorca and Mallorca. Highlights were a 4x4 tour of Menorca, visiting a cheese farm, horseback..." read more
Traveled to Spain as a family in June, 2022

Russalle A.
Pennsylvania, United States
"Marta was amazing. Not only did she help me plan my Spain trip, but she also jumped in when I asked for help last minute on my Portugal trip. She checked in ..." read more
Traveled to Spain solo in May, 2022
Create your custom-made trip to Spain
Get Started