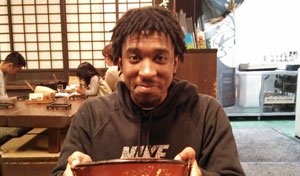 Followed by more than a few nights spent playing Dragonball GT: Final Bout; learning about samurai history on YouTube; and attempting to pick up the Japanese language; along with 7-8 years mastering Shotokan karate (where he reached the 2nd dan of black belt), it's safe to say, Desmon was hooked on all things Japan.

He's lived in Katsushika-Ku in Japan twice, first for 8 months while at university, then another year with a host family while studying at a language school. This quaint and quiet corner of Tokyo - close enough to enjoy the buzz of the city, while remaining a refreshing escape from the hustle and bustle - became his favorite place in the whole country. Apparently there's nowhere quite like Mizumoto Park to see the cherry blossoms.

What's more, Katsushika-Ku is next door to Kameari, a town that's home to the famous Kochikame manga series. It's even dotted with statues of Ryo-san, the main character (and perfect next door neighbor to this manga fan)!

Now back in the US, in between continuing his Japanese practice and being a superstar travel consultant, he's keen to get back into drum lessons and basketball. While he used to really enjoy watching and playing the game, these days Desmon has a pretty big soft spot for the basketball manga series Slam Dunk. You can take the boy out of Japan!

"Lots of my experience comes from living in Tokyo and the surrounding areas in varied life-stages. I have also been to the western part of Japan and have stayed in Kyoto and Osaka"

"My first experience traveling to Japan was when I was 13. It was apart of a two week program where I was able to stay with a host family, attend school, and go around sightseeing. The family and I kept in contact and have become like a second family to me.

Going to Japan changed my entire perspective on life. I remember finding it amazing that there are people under the same sky in different parts of the world who all have hopes, dreams, families, and their own set of experiences. The other places I have been to internationally include Canada, and Germany.

Having these experiences has made me want to share the travel bug that I inherited with other people, and help them create their own stories and memories."

"The very first time I went to Japan it was with a group of other students from the middle school I attended. When we arrived in Katsushika-ku, it was like we were "The Beatles". We got a chance to meet the mayor and were even on TV. Going to the school in Katsushika-ku we quickly became very popular and made tons of friends. The whirlwind of faces, places, and experiences definitely left an unforgettable impression. "

Desmon is part of the following groups: Japan Travel Agents

Most visitors to Japan hit up Kyoto's temples, Tokyo's shopping streets, and Osaka's food scene—but there's much more to this country than what you'll find in its cities. Soak in natural hot springs, hike through primeval forest, and spot wildlife on a pristine chain of islands with these under-the-radar suggestions.

Crescent-shaped islands surrounded by deep blue sea, Japan has everything from Buddhist temples to great beaches. Home to both a robot restaurant and an ancient rainforest, it's beautiful, diverse, and never boring. Here are ten essential things to do in the Land of the Rising Sun.

The beautiful ancient city of Kyoto is the spiritual home of Japan and the perfect base for this week-long cycling adventure. Explore the streets of Kyoto by bike and venture further afield as you delve into Japanese culture and cuisine. Take an exhilarating ride from the city to sacred Mount Koya and around the region's stunning landscape for an unforgettable vacation.

Looking for lesser-known, beautiful places to visit in Japan? Here is a shortlist of under-the-radar destinations to visit outside of the usual places most people go, like Tokyo, Osaka, and Kyoto.