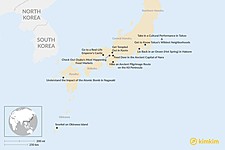 Crescent-shaped islands surrounded by deep blue sea, Japan has everything from Buddhist temples to great beaches. Home to both a robot restaurant and an ancient rainforest, it's beautiful, diverse, and never boring. Here are ten essential things to do in the Land of the Rising Sun.

Japan gives the best kind of culture shock. From watching real-life sumō wrestling and trekking along ancient paths once walked by samurai warriors, to dining on matcha everything and finding calm in perfectly raked Zen gardens, here are ten brilliant things to do in Japan.

#1 Get Templed Out in Kyoto

The Japanese capital for nearly a thousand years, Kyoto is known for its ancient Buddhist temples and Shintō shrines.

There’s so much to see in this city where ancient religious sites are as ubiquitous as 7-Elevens: at the popular Fushimi Inari Taisha, you can follow thousands of tangerine-hued torii gates up to sacred Mount Inari, leading to grottos filled with lit candles and stone foxes. Then there are the minimalist rock gardens of Ryoan-ji, part of a 15th-century Zen temple.

If you can, give yourself at least three days to get to know Kyoto. The best way to explore? Rent a bike.

#2 Hike an Ancient Pilgrimage Route on the Kii Peninsula

Imagine spending eleven days hiking along Japan’s Kumano Kodo, a network of ancient trails that runs across the remote hills of the Kii Peninsula. Count on grand shrines to peek in, hot springs to rest those tired feet in, and waterfalls to gape at.

Learn more about self-guided treks of the area here. The itinerary even includes a stay in a Buddhist temple.

#3 Take in a Cultural Performance in Tokyo

A competition that looks a lot like two mountains trying to move each other, sumō is a sport like no other. If it’s the right season (January, May, and September in Tokyo), then you can sit ringside to watch two yokozuna grand masters compete. During other months, you can still catch athletes training at one of the sumō stables spread out around town.

Other traditional performances to keep an eye out for in the capital include kabuki dance shows and noh theater. Dating back to the 14th century, noh, which involves beautiful masks and haunting music, is the oldest surviving form of Japanese theater.

#4 Lie Back in an Onsen (Hot Spring) in Hakone

Just a couple of hours by train south of Tokyo, Hakone is Japan’s premier hot springs resort town, famous for its onsen.

You can opt for the "romantic" train, or "Romancecar," from Shinjuku in Tokyo, but most travelers take the Shinkansen bullet train to Odawara and then continue on by bus for the rest of the journey. Another big draw, aside from all those onsens: on clear days, you’ll be treated to breathtaking views of Fujisan (Mount Fuji), Japan's highest mountain.

Ropeways, cable cars, and funicular trains connect the area, so you can easily spend a few days exploring. Relax by Lake Ashino-ko, hop between world-class art museums, and test out a variety of different onsen.

The 4:15 am tuna auction at Osaka Central Fish Market is one pre-dawn wake-up call that's worth getting up for. In fact, if you’re into all things culinary, you could easily dedicate your entire trip to getting to know Japan’s food scene.

There’s sake—a fermented rice drink—to taste, the world’s best sashimi to devour, mochi rice cakes and matcha green tea ice cream to get obsessed with, and much more. In cities like Kyoto, there are entire restaurants dedicated to serving up those perfect, wobbling hunks of creamy tofu. Other places specialize in warm and nutty handmade soba noodles.

InsideJapan offers 13-day gastronomic adventure tours across the main island, which you can learn more about here.

#6 Understand the Impact of the Atomic Bomb in Nagasaki

In 1945, at the end of World War II, the U.S. dropped two nuclear bombs on the Japanese cities of Hiroshima and Nagasaki. At least 129,000 people died in the bombings. Visiting the memorials, monuments, and museums dedicated to the attacks—and ultimately, to peace—can be a profoundly moving and humbling experience.

A friendly, hilly little city where the most charming way to get around its cobblestone streets is by vintage tram, Nagasaki is worth a visit for many more reasons as well: imagine pretty streams dotted with cranes and koi, like an ukiyo-e woodblock print come to life. You'll find atmospheric cemeteries, overstuffed antique stores, Buddhist temples, loads of museums, and some of the kindest people around.

With its centuries-old history as a trading port, Nagasaki has a delightful international influence, which you'll see for yourself in spots like Shinchi Chinatown, the wooden houses of Dutch Slope street, and the many bakeries selling Portuguese castella sponge cakes.

#7 Feed Deer in the Ancient Capital of Nara

The little city of Nara, just south of Kyoto, served as the Japanese capital from 710 to 784. More than a thousand years later, making a visit here can feel like taking a step back in time as you wander between the temples, shrines, and traditional tea houses that dot Nara Park.

If you can stretch it, Nara deserves a couple of days for exploring. It's home to eight UNESCO World Heritage Sites, along with the world’s biggest bronze Buddha, a prehistoric rainforest with an old samurai route to ramble along, and more than a thousand free-roaming deer.

P.S. Yes, you can feed the deer. Just don’t expect them to leave you alone once they figure out you’re handing out rice crackers!

#8 Get to Know Tokyo’s Wildest Neighborhoods

Central Tokyo has all the glitz and glamour and big glass skyscrapers. Get to the Harajuku shopping area to munch on waffles, pop into theme cafés—you'll even find a monster-themed café—and check out the most outlandish teen fashions.

To shop the big-name brands, you'll want to head to the heart of Shibuya. You can cross the world’s busiest—and perhaps most photogenic—crosswalk, made famous by the movie Lost in Translation. Also check out Ueno Park, home to the city's major museums. And don't forget to eat. Tokyo has more Michelin stars than any other city in the world, so you can pocket Michelin-starred meals like they're Pokémon points.

#9 Go to a Real-Life Emperor’s Castle

In Japan, castles don’t have crumbling, romantic spires like they do in Ireland or Germany. Instead, you can expect giant moats, imposing walls, and graceful architectural curves. Himeji Castle, Matsumoto Castle, and Hikone Castle have all preserved their original constructions. Equally awe-inspiring, they're easily accessible and perfect for first-time visitors to Japan.

Japan’s answer to Hawaii, the island of Okinawa is home to colorful coral reefs, gorgeously warm weather, semi-tropical jungle, and sugar-sand beaches. Are you tempted yet?

You can learn more about Japan's main regions, including Okinawa, in this article.