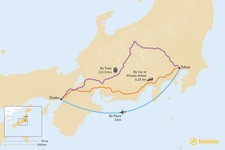 There are several ways to get from Tokyo to Osaka. Although most travelers choose to travel by high-speed shinkansen (bullet train), you can also fly, drive, or take a bus. Several low-cost airlines offer service between Tokyo and Kansai International Airport, making air travel an affordable option.

Driving from Tokyo to Osaka is not recommended because it takes much longer than traveling by train or airplane; in addition, tolls are costly and parking in Osaka is expensive and difficult to find. However, if you wish to visit any off-the-beaten-path places as you travel from Tokyo to Osaka, hiring a private driver might be a good option for you.

Traveling to Osaka from Tokyo by bus is easy, as JR Bus, Willer Express, and other bus companies offer multiple departures from Tokyo, but the trip takes at least eight hours, making bus travel a less-desirable transportation option.

As you make your way from Tokyo to Osaka, perhaps as part of a 10-Day Cities and Islands of Japan itinerary, consider stopping in Nagoya or Kyoto to see the sights. Nagoya's Atsuta Shrine is one of Japan's most important Shinto shrines, and the Tokugawa Art Museum's collection includes samurai swords, Noh drama costumes, scrolls, and other artifacts from the Tokugawa Shogunate. Car buffs can tour the Toyota plant and visit three Toyota museums.

Kyoto is famous for its many temples and shrines, and is home to seventeen UNESCO World Heritage Sites. The Higashiyama District features streets lined with old wooden buildings evoking Kyoto's earlier days. While there, you can visit temples, shrines, parks, and museums via pedestrian walkways. Kyoto's spring cherry blossoms, fall foliage, and Sagano Bamboo Forest attract visitors from around the world.

The fastest and easiest way to get from Tokyo to Osaka is by shinkansen. Trains depart frequently from Tokyo, and the trip to Osaka take just two and one-half to three hours, depending on which line you take. The Nozomi Line offers the fastest service, but you cannot use JR passes on Nozomi trains. No matter which shinkansen line you choose, you will travel in comfort and avoid city traffic.

Duration: Approximately 3 hours, depending on airports chosen, including ground transportation

Duration: 6 and a half hours or more, depending on traffic and route

Although Tokyo and Osaka are 314 miles (507 kilometers) apart, driving from Tokyo to Osaka can take 6.25 hours or longer on toll expressways because of traffic congestion. Time your travel to avoid rush hours, and consider taking the fastest route, which usually includes the Shin-Tomei/E1A, Higashi-Meihan/E23, Shin-Meishin/E1A, and Meishin/E1 Expressways, unless you are stopping to sightsee along the way.

How to Get from Kyoto to Osaka

Kyoto and Osaka are just 35 miles (56 kilometers) apart, so it does not...
Getting Around Japan

This diverse 10-day itinerary leads you through Japan's four major...

Just as fascinating as Japan's ultra-modern urban culture is its...

Eat your way through the "land of the rising sun" on this immersive...

Experience the tranquil magic of a Japanese winter during this immersive...

H
Harvey C.
Arizona, United States
"Amazing travel experience with KimKim. I would like to pay extra thanks to our travel agent Christine. She is knowledgeable and approachable. She helped p..." read more
Traveled to Japan as a family in January, 2023

Danielle L.
Tennessee, United States
"We had another wonderful trip thanks to KimKim! Christine helped organize our Japan adventure. She was kind, patient, and detail-oriented! She made sure to ..." read more
Traveled to Japan as a family in December, 2022

Maria O.
Illinois, United States
"This was an amazing trip thanks to Claudia and then Kristy, who made it all possible. My husband turned 50 on 12/31 and to make it a memorable birthday, we s..." read more
Traveled to Japan as a couple in December, 2022

Brianna D.
Canada
"We had a wonderful time. Irish was fabulous planning everything and Shegao was just wonderful. I would recommend them to anyone visiting Japan!" read more
Traveled to Japan as a family in December, 2022

Kelsey S.
New Jersey, United States
"Max was a great guide and we had a wonderful experience! There is so much history, culture, and delicious food to be had! Our stay on Mount Koya was an indes..." read more
Traveled to Japan as a couple in November, 2022

Peter E.
United Kingdom
"A very well thought out trip working around 2 Rugby world cup matches which inevitably constrained the itinerary to a degree. The information provided before..." read more
Traveled to Japan as a couple in September, 2019
E
Emily S.
Utah, United States
"Carrick was integral in making this trip happen! From booking the travel and accommodations, to answering questions, to helping me be as flexible as possible..." read more
Traveled to Japan solo in October, 2019
Create your custom-made trip to Japan
Get Started