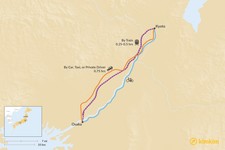 Kyoto and Osaka are just 35 miles (56 kilometers) apart, so it does not take very long to travel between these iconic Japanese cities. In fact, you can even bicycle from Kyoto to Osaka, perhaps after taking a 7-day bicycle tour of Kyoto and the surrounding area, because a network of bike paths connects the two cities. While most visitors get from Kyoto to Osaka by train, you can also drive or hire a taxi or private driver. Bus travel is not recommended because it is less efficient than traveling by train.

While it might be tempting to head straight for Osaka from Kyoto, consider stopping at a temple or park along the way. Minoo Park, which includes some temples and Minoo Waterfall, is a large nature park near Osaka. Closer to Kyoto, just outside Yawata, you can hike up Mount Otokoyama to see the Iwashimizu-Hachimangu Shrine, a Shinto shrine originally dedicated in 860 C. E. and later restored by Oda Nobunaga and Tokugawa Iemitsu. If you do not want to walk to the shrine, you can take a cable car. (Taxis are permitted when the cable car is being repaired.)

If time permits, a detour through Nara, Japan's first permanent capital city, will allow you to see the famous deer in Nara Park as well as several temples, gardens, and shrines. Consider staying in a ryokan, or traditional Japanese inn, while you are in Nara.

Trains run frequently between Kyoto and Osaka. You can take the shinkansen (bullet train) to Shin-Osaka Station, but most people take the less expensive JR Limited Express or Special Rapid Service trains to Shin-Osaka or Osaka Station. The trip takes longer (half an hour rather than 13 minutes), but it is still a very short journey. Slower trains, run by Hankyu Railway and Keihan Railway, can be a good option for visitors because they stop at places that are popular with tourists.

By Car, Taxi, or Private Driver

Duration: 0.75 hours or more, depending on traffic

Under ideal conditions, it takes approximately 45 minutes to drive from Kyoto to Osaka via toll expressway. Kyoto's legendary traffic can slow you down, however, especially during cherry blossom season, when roads are clogged with sightseers in cars, taxis and buses. If you want the convenience of a car without the worries related to driving in downtown traffic, consider hiring a private driver or taxi to take you to Osaka.

Bicycle paths link Kyoto and Osaka, taking you along the Yodo River through flat terrain. The paths are very popular; they are also used by walkers and joggers. Remember to keep to the left on the bike paths, just as you would while driving or cycling on a Japanese street. Watch out for the anti-motorcycle barriers, which come in a variety of shapes and will force you to slow down or even stop your bicycle.

This diverse 10-day itinerary leads you through Japan's four major...

Eat your way through the Land of the Rising Sun on this immersive...

Just as fascinating as Japan's ultra-modern urban culture is its...

Perfect for active walkers, this trip combines a four-day walk on...

Debra D.
Australia
"Norman (local rep) and Takuro (bike support/baggage transfer) were both friendly and helpful. Tech guy tried to help with missing route, this didn't go so we..." read more
Traveled to Japan as a couple in April, 2019
Create your custom-made trip to Japan
Get Started