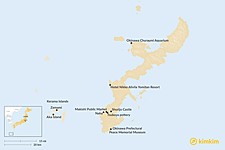 Okinawa's attractions have something for everyone. They cater to cocktail-sipping beach bums, history buffs, and active adventurers alike. The island is fairly small, so even a long weekend can make for a refreshing breath of tropical air.

If an easy beach holiday is all you're after, Okinawa delivers: you'll have the white sands and turquoise waters of your vacation dreams. But active travelers will also find plenty to appreciate, with opportunities for snorkeling, diving, paddling, and cycling. And since Okinawa has its own distinct identity within the history of Japan, history lovers can discover its unique culture in art, peace, and natural history museums.

Many of Okinawa's delights are easy to enjoy on the fly, but others will require some advance planning depending on the season and demand.

Most visitors will arrive at Naha airport, on the southern end of the island. If you've reserved ahead, you could feasibly head straight for a boat dive or to a ferry bound for the Kerama Islands. While Naha's public transportation is excellent, buses to outer destinations are often infrequent. Rent a car to maximize your time if your visit is a short one.

Most people will find that three to five days provide plenty of time to explore Okinawa. If you can stay longer, it's worth considering jetting off to one of Japan's other Southwest Islands (Nansei-shotō).

You can read our suggestions for a three-day itinerary in Okinawa.

Okinawa's highlights will appeal to those with many different tastes. Naha has an impressive range of art museums for a city of its size, while its boisterous eateries and covered market arcades hold fascinating discoveries for gourmets. Okinawa's dive spots, including those in the Kerama Islands, tend to be uncrowded and pristine. Kids will be thrilled by the local underwater specimens on display at the island's spectacular aquarium.

Shuri Castle: From its advantageous hilltop location, Shuri Castle's meticulously reconstructed 14th-century castle is an architectural anomaly compared with Japanese buildings of the same period. Okinawa's partly Chinese-influenced culture can be seen in the construction and design elements of Shuri Castle, which was once the headquarters of the Ryūkyū Kingdom.

Okinawa Prefectural Peace Memorial Museum: The Battle of Okinawa marked not only the end of World War II but a massive loss of civilian life in Okinawa. This museum was built to commemorate the brutality of the battle and of war in general. Meant to discourage this kind of tragedy from occurring again, the museum's strikingly curated exhibits serve both as stark historical documents and pleas for peace. Dotted along the southern coastline are other worthy historical sites preserved as museums and war monuments that also promote messages of peace.

Kerama Islands: Even those visiting Okinawa on the shortest of itineraries should strive to make at least a day trip to one of the Kerama Islands. Ferries to the nearest of the bunch, Aka and Zamami, depart and arrive a few times daily. These tiny islands offer nearly nothing in the way of entertainment except for their abundant tropical beauty. The villages have neat, family-run accommodations, places to eat and drink, and some dive shops. Rent a bike, park yourself at the beach, and snorkel your heart out with the sea turtles: you'll find simple island relaxation in a gorgeous setting.

Okinawa Churaumi Aquarium: This monumentally-scaled aquarium is one of the largest in the world,  pumping in offshore seawater and showcasing deep-sea species native to Okinawa. Without a doubt, the stars of this aquarium are its whale sharks, which you can catch swimming among colorful tropical fish and graceful rays. If you prefer your underwater exhibits hands-on, there are touch tanks full of sea stars and mollusks. The aquarium is located about 2-1/2 hours north of Naha on the Motobu Peninsula.

Tsuboya Pottery District: One of the more photogenic neighborhoods in Naha, this zone once housed ceramics studios and factories. Nowadays, the main street is lined with remaining studios and shops selling classic Okinawan pottery, including the shiisā (guardian lion-dogs) that you'll see adorning many local rooftops. Wall mosaics made of chipped pottery, climbing vines and local cats add to the pedestrian-friendly ambiance. At the entrance to the neighborhood is the Tsuboya Pottery Museum for those interested in a more historical context.

Makishi Public Market: Several shopping arcades branch off of Naha's main boulevard, Kokusai-dōri, including Makishi Market. If you love getting to know a new place with a stroll through the local market, this one's for you. Find bumpy bitter melons, dried shrimp in all sizes imaginable, and the freshest catch of the day. The noisy food court upstairs is packed with tiny restaurants hustling to serve the hungry clientele waiting for sushi, soki soba (noodles with barbecued pork), and gōyā champuru (bitter melon stir-fry).

Ideal times to visit Okinawa are in the spring (March to mid-May) and fall (September to early December). Summer brings rain, with July and August being peak typhoon season. Water temperatures are warm, ranging from the 70s to the mid-80°F range year-round, although it does feel chillier in winter.

Flights to Naha depart daily from Tokyo (less than three hours) and Osaka (about two hours). Once in Naha, the monorail runs directly from the airport to downtown Naha and to Shuri Castle. Buses and rental-car services can also be found at Naha airport.

Several Japanese-style hostels offer very inexpensive accommodations, but they're generally bare-bones and cramped. Mid-range business hotels are plentiful around downtown Naha, as are higher-end options like Hotel Rocore or Hotel JAL City Naha. For a more upmarket luxury experience, the Hotel Nikko Alivila Yomitan Resort boasts a private beach. If you plan on staying on one of the Kerama Islands, Zamami has more guesthouse options than Aka.

In Naha, you can sample beautifully prepared multi-course meals of traditional Okinawan specialties in various restaurants. A favorite is Nuchigafu, where dishes appear at the table course by course, served in an atmospheric restored house in the pottery district. Near Shuri Castle, Ashibiunā serves à la carte Okinawan cuisine, also in a traditional house overlooking a peaceful rock garden. If you'd like to get serenaded by sanshin (Okinawan three-stringed instrument) song, head for Paikaji, a more tourist-oriented but perfectly respectable establishment. For more casual eats, head to the food court on the second floor of Makishi Public Market.

With two weeks to spend in Japan, travelers have a great range of...
Make the Most of Your Time in Japan

Get ready for an unforgettable village-to-village trek on the Kii...

Welcome to Japan! On this two-week journey around the main island,...
Japan Tours & Itineraries

With two weeks to spend in Japan, travelers have a great range of...

Ski, snowboard, and sip sake on this two-week adventure around Japan's...

Mt.Fuji, the highest volcano in Japan, and the surrounding lakes known...
Getting Around Japan