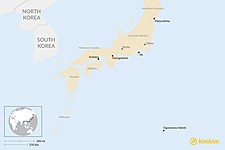 Most visitors to Japan hit up Kyoto's temples, Tokyo's shopping streets, and Osaka's food scene—but there's much more to this country than what you'll find in its cities. Soak in natural hot springs, hike through primeval forest, and spot wildlife on a pristine chain of islands with these under-the-radar suggestions.

Japan is home to incredible, less-visited natural sites. There's the Izu Peninsula, which was created from submarine eruptions in the Philippine Sea about 20 million years ago, and the subtropical Ogasawara Islands, which have only been inhabited for the last couple centuries. Read on to discover a whole new side of the country.

With its jaw-dropping views of Fujisan (Mount Fuji), Hakone is a popular hot springs destination among Tokyo weekenders. But the lush, volcanic Izu Peninsula is full of natural onsen, and it's only a two-hour train ride south of the capital.

Base yourself in the chilled-out coastal city of Itō, where families go line-fishing at the harbor on weekends. Enjoy bayside views of the tiny resort island of Hatsushima, and don't leave without trying the sushi: it's as fresh as you’d expect for a city along the Sagami Bay, which is teeming with sea life.

A great local trail to check out is Jōgasaki Kaigan. It winds past hulking lava rocks and sun-dappled pine forests. You’ll also get to cross the 157-foot long Kadowaki Suspension Bridge, where you'll be rewarded with panoramic views of the coast. Looking at the richly-hued waves crashing below, you might understand why Hokusai, a 19th-century ukiyo-e painter, was so excited to discover the color Prussian Blue.

Most hikers end their trip on reaching the lighthouse, which you can climb for 360-degree views. But continue along the trail, which turns into the Jōgasaki Nature Study Course, past Renchakuji Temple, and you’ll get to walk along sea cliffs and through thick, fern-covered forest. End your hike at Izu-Kogen Station, where you can catch a bus or train back to Itō. Bonus: there’s even an onsen foot bath where you can soak your tired legs while you wait.

In Tokyo's famous art museums, you can see how Japan's painters have depicted the country over the centuries. But you can also step into their shoes with a visit to the actual landscapes that have inspired Japanese artists for so long.

When the 17th-century haiku master Matsuo Bashō set his eyes on the hundreds of tiny, pine-covered islands that make up Matsushima Bay, he thought he had found the most beautiful spot in all of Japan. On his first night there, he was so awe-struck that he couldn't get to sleep. He wrote of a place where "pines are of the freshest green and their branches are curved in exquisite lines, bent by the wind constantly blowing through them."

The town of Matsushima, in Northern Honshu, is now an easy day trip from the city of Sendai. You can retrace the steps of the famous poet by taking a cruise through the bay, which follows the same route Bashō took 300 years ago. Keep an eye out for Japanese cormorants, a type of seabird, drying their wings or hunting for fish while you cruise.

If you'd rather explore on foot, you can hike west for 15 minutes from the train station to reach Saigyo Modoshi no Matsu Park, where you'll find picture-perfect views of the pine-forested islets. Time your visit for spring and you'll have a backdrop of pink cherry blossoms for your photos.

Need more help planning when to go? You can learn more about seasons in Japan in this article.

Plan your trip to Japan
Chat with a local specialist who can help organize your trip.
Get Started

With its Buddhist temples and Shintō shrines, Nara is one of Japan's most popular destinations, and it often has the crowds to show for it. But you don't have to venture very far afield to escape the hordes of schoolchildren on field trips, as adorable as they may be.

Behind Kasuga Taisha Shrine in Nara Park, you'll find Kasugayama Primeval Forest, a sprawling woodland with scenic hiking trails. Logging and hunting have been banned there since the 9th century, so you'll discover abundant flora and fauna, including 175 varieties of trees. Be on guard for wild boar, who also call the sacred forest home.

You'll have your pick of a few paths. Follow Yagyu Road to retrace the same trail as samurai warriors, who used to head to Yagyu Village, once a well-known swordmaking hub, to pick up new blades. Along your way, you may notice ancient, moss-covered Jizo statues, which are traditionally decked out in red hats and bibs. The Buddhist deity is the protector of travelers, so you'll be in good hands.

Many places are called off-the-beaten-path, but few destinations live up to the name as well as the Ogasawara Islands, a UNESCO World Heritage-protected island cluster that is home to 195 species of endangered birds.

The islands had only animal residents until the first half of the 19th century, when a group of Europeans and Americans formed its first colony of settlers. Today, it's technically part of the Tokyo prefecture, but you'll feel as far away from Shibuya Crossing as a person can get: the main island of Chichijima, where most of the bars and hotels are located, is still 25 hours by ferry from the capital.

But it's worth the time it takes to get there. You can swim with bottlenose dolphins, spot rare birdlife, enjoy humpback and sperm whale sightings, and rent a scooter to explore pristine, coral-filled beaches.

Teshima, a small, sparsely-populated fishing island in the Seto Inland Sea, might seem like a surprising spot for a contemporary art hub.  But the island not only plays host to the Setouchi Triennale, an arts festival, it has also become the venue for numerous world-class public art installations.

The standout permanent exhibit is Teshima Art Museum, designed by artist Rei Naito and architect Ryue Nishizawa. Meant to resemble a concrete water droplet, it evokes the passage of time and the flow of seasons. Standing in the middle of a rice field, the minimalist structure is entered by visitors, who can view the changing sky from oval openings in the ceiling. Another beachside exhibit, the French-designed Les Archives du Coeur (Heart Archives), lets people record their own heartbeats.

Also not to be missed is the island itself, with its traditional-style houses, fishing ports, and terraced fields. It's served by two ferry lines, and you can rent a bike in the village of Karato for an excellent day of exploring.

By November, Japan has well and truly entered autumn mode. Towards the...