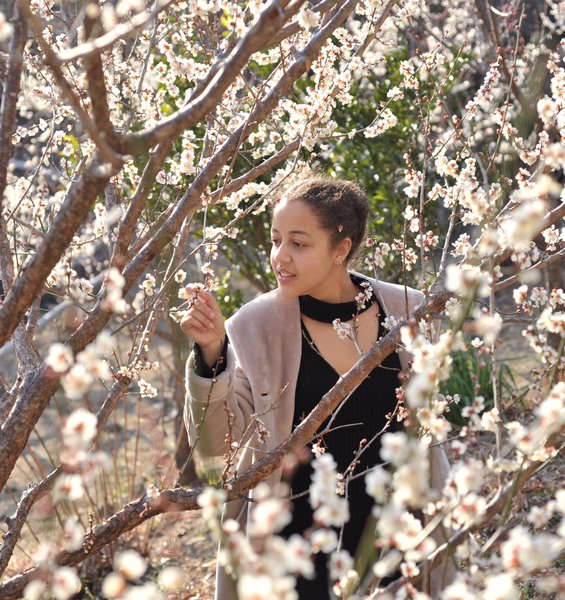 I grew up in South Africa, but my parents were originally from Britain and Uganda, which made our family a bit of an anomaly in post-apartheid South Africa. Being mixed and receiving exposure to so many different cultural groups growing up, meant that I always had an appreciation for different cultures. I was also exposed to international travel early on as most of my extended family lived overseas.

Fast-forward to the present, I now live just outside of Tokyo, can communicate in Japanese, and get to do what I love - travel.

I run the administrative side of Kichi Japan as well as craft custom tours, which is a great fit because I am a perfectionist at heart, and love planning out all of the nitty-gritty details to make our guests' travel as smooth as possible. Travel for me is about experiencing something outside of my norm, and welcoming the new perspective it brings.

You can learn so much just by getting out of your comfort zone or local bubble, and opening yourself up to try new things. And although I do enjoy exploring the big city hotspots (they’re famous for a reason), I tend to prefer the more intimate travel experiences away from the crowds. The less 'touristy', the better!

"We are all about authentic Japan. Because we actually live here rather than being based abroad; we know where to find hidden gems, have relationships with local people and organizations, know the culture, and specialize in providing catered one-of-a-kind experiences! Anything from big city fashion tours and food experiences, to fishing with a monk on a semi-deserted island or trekking with the mountain ascetics - we do it all. "

"I've always had an adventurous spirit. Growing up in South Africa, I had loads of opportunities to travel around several of the provinces and was always game to try anything new. I spent a year living in a rural village near Zululand where the only roads were dirt ones, and we often went days without water. However, it was a fantastically beautiful place to live and I experienced many things most people wouldn't, because visitors don't venture that far.

I first came to Japan on a 2-week trip a couple of years ago, and this is where I met my future-husband who just so happened to run tours in Japan! After resigning from my job in the UK, I returned to Japan and we spent a few months traveling the entire country together. I think I knew even then that I would end up living here some day.

After that everything just sort of came together. I moved to Japan and, after discovering that I had a real knack for trip planning, started working with my partner at his company (Kichi Japan). "

"One of the most memorable travel experiences I've had actually occurred on a couple of small islands in Nagasaki. We have a relationship with a monk there who is one of 31 people who live on the island. He welcomed us into his home while his wife made us a delicious lunch, and took us on a hike through a very long and very dark lava tunnel, at the end of which was a shrine. He, his daughter and granddaughter then proceeded to clean out the shrine and chant a prayer - all of them dressed in camo!

He then took us on his private boat to another nearby island where only 1 person - a 70-year-old woman - is left living there. The island and its homes are completely overgrown, and the most interesting structure was probably the old school. Everything was still there - desks, chalk, books, shoes - all covered in dust and vines. It was as if all the people had simply faded away as nature had claimed back its property. It was a sober reminder of how much of the countryside and small islands are dying, as most people move to the big cities.

It ended off well though as the 70-year-old 'obaachan' led us on a literal bushwhack through the forest to show us a lagoon where she used to swim as a child. May I be as active and healthy as her when I reach that age!"

Gibwa is part of the following groups: Japan Travel Agents

Enjoy the quiet scenery and traditional Japanese culture in Kyoto on this refreshing adventure. In just five days, you'll visit sacred shrines, wander through ancient forests, take a boat cruise down a river lined with cherry blossoms, practice meditation with a Buddhist monk, and learn about the traditional arts of calligraphy and flower arranging. You'll also detour to the historic city of Nara, famed for its giant Buddha statue and resident population of deer, before returning to Kyoto for one last evening of sampling sushi and sake.

Offering ancient traditions and futuristic fun, Japan is filled with one-of-a-kind attractions for the young—and the young at heart. This two-week family-friendly itinerary features a great mix of cultural sightseeing and hands-on activities, like a sushi class and a samurai sword-fighting course. You'll explore the character cafés and comic book shops of Tokyo, boat on a lake near Mount Fuji, and wander through towering groves of bamboo in Arashiyama, taking time to learn about history in Hiroshima and Kyoto. Rounding out the trip are day trips to two world-class theme parks: Disney Sea and Universal Studios Japan. This action-packed journey is sure to be a hit with the whole family.

Traveling together as a family is such a special experience, and this 10-day action-packed adventure is specifically designed with families in mind. From Kanto to Kansai, this trip takes you from Tokyo and its modern, bustling streets to Kyoto with its tight hold on tradition. It's the perfect way to take in all that Japan has to offer while having plenty of family fun.

Off the Beaten Path in Japan - 14 days

This unique 14-day tour will take you to the major cities and destinations of Japan as well as hidden destinations that few tourists explore. You'll see Tokyo's futuristic neon lights, explore rice fields during a homestay in Izumo, wander through traditional temples in the company of native deer in Nara, relax on pristine beaches in the remote Goto islands, and more. Traveling through various destinations by steam train, ferry, and traditional boat, you'll get an intimate glimpse into Japanese ways of life.

This diverse 10-day itinerary leads you through Japan's four major cities. Start in Tokyo, exploring the city's ultra-modern technology and ancient monuments. Then head to the quiet shrines of traditional Kyoto, the buzzing food scene of trendy Osaka, and the historic landmarks and lively downtown of Hiroshima. Along the way, you'll visit beautiful islands and bamboo forests, sample regional delicacies on a food tour, see sumo wrestlers in action, and try locally produced sake and whiskey.

This 16-day adventure is planned with nature lovers in mind, who also want a touch of Japan's urban highlights. You'll traverse the well-worn paths of the mountain monks, breathe in the history of temples which have endured for centuries, take a boat ride down Takachiho Gorge and test your endurance as you hike Mount Misen, off the coast of Hiroshima. This tour offers a nice balance of remote destinations rarely seen by tourists, combined with museum visits and culinary experiences in Tokyo, Osaka, and Hiroshima.