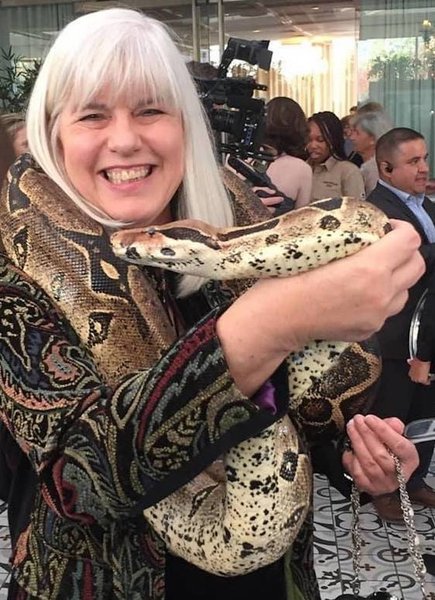 Jenny Peters has covered the entertainment, lifestyle and travel worlds as a freelance journalist for many years. Her credits include writing on travel, restaurants, wine and spirits, spas, film/celebrities, design and architecture for USA Today, National Geographic Traveler, New York Lifestyles Magazine, TimeOut. com, TripSavvy.com, AARP.com, Variety, New York Magazine, the Los Angeles Daily News and many other domestic and international publications, websites and wire services. Her favorite places to be are on the beach playing volleyball, scuba diving in warm tropical waters, sipping wine in the middle of a vineyard or simply strolling the streets and soaking in the atmosphere of one of the world's great cities. She splits her time between Los Angeles and New Orleans, two of the world's greatest cities.

"I cover the world doing cultural, historical and outdoor travel articles as well as adventure, luxury and culinary stories. I am an expert on the United States, Italy, Australia, Fiji, French Polynesia, Palau and the Caribbean, having returned many times to those places to soak up the scene, spend time under the water and make new friends."

"I got the opportunity to begin writing travel articles for luxury magazines in the 1990s, after being a freelance film reporter for a decade. I quickly discovered that seeing the world and telling readers about the wonderful places and cultures in the big wide world was as interesting to me as interviewing Hollywood's biggest stars, and I was hooked. Been both a travel reporter and an entertainment writer ever since."

"I got my scuba certification at the Great Barrier Reef 20 years ago and love being under the water. The most memorable dive I have done (after logging hundreds of dives around the world) happened recently, when I had the chance to dive alongside Jean-Michel Cousteau in Fiji, at his Jean-Michel Cousteau Resort there. His father Jacques invented scuba diving and Jean-Michel been a force in protecting the oceans throughout his life. Not only was it a gorgeous dive filled with soft corals, sea turtles, sharks and more, but it was also inspirational, as Jean-Michel is 80 years old and still going strong. I hope to be doing the same when I am 80!"

Traveling from Venice to the nearby island of Murano (the "Glass Island") is accomplished by boat, either by taking a public vaporetto (water taxi) or hiring a private water... read more 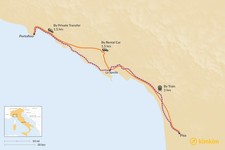 Traveling from Portofino to Pisa means a trip down the coast of the Ligurian Sea, a lovely, scenic ride of about 89 miles (143 km). It's best accomplished by private transfer,... read more 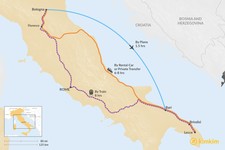 Traveling from the Tuscany region of Italy down to the southern region of Puglia is a trip of almost 500 miles (800 kilometers) that will take about seven to eight hours by car... read more

Traveling the 1,500 miles (2,414 kilometers) from Sydney to Cairns, the main gateway to the Great Barrier Reef in Far North Queensland, can be accomplished by plane, train, bus... read more 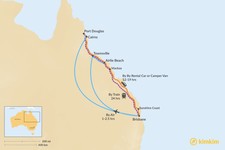 Australia's vast state of Queensland is a brilliant place to visit, with distinct contrasts. Brisbane is a sophisticated metropolitan city, while to the north, the smaller... read more 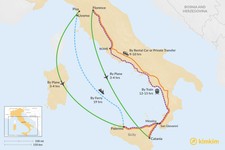 How to Get from Tuscany to Sicily

Wine lovers know that both Tuscany and Sicily create some of Italy's best wines, so that's one good reason (among many others) to travel from Tuscany to Sicily. Seeing Mt. Etna... read more