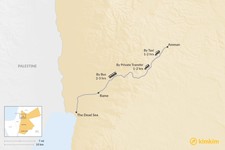 The approximate distance from Amman to the Dead Sea is 37 miles (60 km). The best mode of transportation is a car—whether in a rental or taxi, the drive is easy and can be done as a quick hop from the city or a longer drive with scenic stops.

From Amman, you'll head southwest until you reach Route 65, also known as the Dead Sea Highway. This ride takes roughly an hour, varying a bit depending on your final destination. Amman Beach is the closest point, and there is an entrance fee, but there are plenty of other places to choose from. Seaside resorts with private beaches can be found all along the coast and are very popular with tourists.

While in the area, you can also explore Wadi Mujib and its many outdoor activities. This nature reserve lies east of the Dead Sea and is known for its beautiful trails and canyons. Make sure to stop at the Visitor Center before heading out for a hike.

A public minibus is a cheap but time-consuming way of getting there. The route isn't direct, and they can be crowded and unreliable. For a little more, you can take a shuttle or tourist bus. Some of the hotel chains in Amman operate buses to their resort locations.

Booking a private transfer is the most convenient option. It's an hour to reach Amman Beach, so many people opt to stop there first but if you have your own driver (or rental car) you're free to explore and continue on wherever you'd like. The Jordanian side of the Dead Sea has about 31 miles (50 km) of coastline, and there's much to see—including the Dead Sea Panoramic Complex, which offers spectacular views and information about the geology, ecology, and history of the area.

Rather than take a direct route to the Dead Sea, try a detour to Madaba, where you can check out the oldest preserved mosaic map of the Holy Land, dating back to the 6th century BC. A few minutes away is Mount Nebo, where on a clear day you can see all the way to Israel. Other detours include a soak at Ma’in Hot Springs and stretching your legs on the trails of the Mujib Biosphere Reserve.

Alternatively, you won't have any problem finding a taxi in Amman—yellow cabs are easy to find and generally mean a licensed driver with a meter.  Hotels will often book them for you if you want to make an advanced reservation. If you're traveling solo, it may be worth sharing a cab with other travelers to get a better rate. Ridesharing apps are gaining popularity in Amman—Uber especially—so that's another option to keep in mind before you leave Amman.

Taking public transportation is the cheapest but least preferred option. Minibusses leave at various times from the Muhajireen station in Amman but they only go as far as Rame. From there, you'll have to take a taxi to your desired location. JETT tourist buses are another alternative. They are air-conditioned and comfortable but they don't run daily and only stop at Amman Beach. They leave in the morning from the 7th Circle bus station but check their website ahead of time as schedules have been known to change.

If you know which resort you'll be heading to, it's worth checking to see if a bus runs from their Amman location. Often, the major chains will provide shuttle service for a fee.

How to Get from Wadi Rum to The Dead Sea

Wadi Rum and the Dead Sea both encompass many miles and are 188 miles...
Getting Around Jordan

From the Old City of Amman to Petra's sprawling ruins, experience a...

Explore the most religiously significant area in the world and its most...

Travel through history as you embark on this tour of Jordan and Egypt....

On this trip, you'll explore the ancient city of Petra deep among...

From exploring Roman ruins outside Amman to sleeping under desert stars...

Off the Beaten Path in Egypt & Jordan: Cairo, Luxor, Pet...

This 14-day itinerary through Egypt and Jordan takes you to places off...

Terri H.
the United Arab Emirates
"Samir was quick to respond and arrange a trip that fit our interests. All guides were friendly, pleasant, knowledgeable, professional. Everywhere we visite..." read more
Traveled to Jordan as a couple in October, 2021

Fatma L.
United Kingdom
"From the time of my first contact with Oriana to the end everything was perfect and our trip was a memorable one. Oriana was very patient and meticulous in h..." read more
Traveled to Jordan as a family in August, 2021

Michael C.
Florida, United States
"I visited the beautiful Jordan at the end of March and early April 2021. I went through the Lonely Planet guide to get a sense of what I wanted to see. (J..." read more
Traveled to Jordan solo in April, 2021