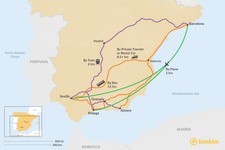 The most comfortable way to get from Barcelona to Andalusia is via a direct, two-hour flight to Seville or another of the region's major cities.

You can also drive (or hire a private transfer). Although this will take a full day—it's over 500 miles (900 km) to Seville, for example—it is a scenic trip, partially along the coast and with the opportunity to stop in cities along the way. A fast train route and a slow but economical bus route are also available.

If you want to have it all in Spain, explore the highlights of Barcelona and Andalusia, plus Valencia and Madrid, in these family-friendly ten-day, 12-day, or 14-day itineraries.

Flying is the fastest and easiest way to get from Barcelona to Andalusia. There are five cities with international airports in the province of Andalusia: Seville, Malaga, Almeria, Granada, and Jerez. All are served by direct flights from Barcelona, with most fares costing under 100 euros. Flights are operated by Iberia, Vueling, and Ryanair.

Private transfers can be booked to drive you directly from your hotel or from Barcelona airport to your preferred destination in Andalusia. If you prefer to self-drive, many major rental car companies exist in Barcelona.

The route from Barcelona to Andalusia offers many opportunities for beach stops along the Costa Daurada (Golden Coast) and Costa del Azahar (Orange Blossom Coast), directly south of Barcelona. You could also stop for sightseeing in the cities of Valencia or Murcia.

By leaving Barcelona early in the morning, you will be able to both enjoy the journey and avoid the evening rush hour of commuters leaving the city.

Only a few trains per day run on these routes, and they tend to fill up quickly, both on weekends and during the week. Booking in advance is highly recommended.

ALSA operates buses heading from Barcelona Sants and Barcelona Nord to various cities in Andalusia. Travel times are long, and some buses make frequent stops. Buses run either all day or overnight.

On some routes, you will be able to choose between “Supra Economy” buses, which offer WiFi and entertainment, and the normal service. Some routes also offer non-refundable fares for a lower price.

Both Barcelona Sants and Barcelona Nord stations are accessible via the Barcelona Metro, or by taxi.

See the jewels of Madrid and Andalusia with this 10-day itinerary. ...

Carlo B.
California, United States
"We are so happy with the trip that Marina help plan for us. It was a 2 week tour of Spain which was curated for our family of four - where we wanted to see g..." read more
Traveled to Spain as a family in July, 2022
Create your custom-made trip to Spain
Get Started