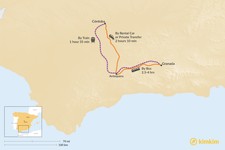 The distance between two major cities in southern Spain’s Andalusian region, Córdoba and Granada, is 81 miles (130 km). The easiest and fastest way to make the trip is by the direct high-speed train, which takes about 1 hour and 35 minutes. Though you should note the fastest trains only run 4 times per day.

Driving yourself in a rental car is also possible, but takes a bit longer (2 hours and 10 minutes). The most luxurious option is to hire a private car service. Buses are the most economical choice, but take 3-4 hours.

The quickest option is to take the AVE train from Córdoba Central, only 20 minutes walking to Córdoba’s main attraction—the Mezquita, a massive mosque dating from 784 CE and one of the world’s greatest examples of Moorish architecture. This brings you directly to Granada Train Station, located one mile from the city’s main square, Plaza Nueva.

AVE trains, run by Renfe, are comfortable and offer air conditioning, a bar-buffet car, and power outlets. Three tiers of tickets are available including turista (standard), turista plus (comfort), and preferente (premier). Turista plus customers enjoy a spacious reclining seat, while the preferente selection offers food service at your seat and access to business lounges at select stations. Not all tiers are available on every train, so if you want a particular class you should book ahead of time through Renfe’s website to make sure it is available. Trains do sell out occasionally, so booking in advance is advised.

Take note: only four of the fastest trains run daily, the earliest leaving Còrdoba at 9 a.m. and the latest departing at 9:27pm. Other trains are available, but are not recommended because they take an extra 45 minutes and require a transfer in Antequera-Santa Ana.

Having a car gives you the freedom to explore the route between Còrdoba and Grenada, and perhaps take a few side trips along the way. The fastest route brings you south on the A-45 highway and then west on the A-92 highway. Though shorter in distance, the diagonal southwest road N-432 is not a major highway so takes about 2.5 hours.

For a logical, quick stop along the quickest route, Antequera is located right at the meeting point of the A-45 and the A-92. This Spanish-baroque city is filled with churches to visit and is often called the true “heart of Andalusia,” because it is in the center of the region’s major cities: Málaga, Granada, Seville, and Cordoba.  Make sure to see the two bronze age burial grounds and Lover’s Rock, a rock which resembles a man’s face in profile and is the center of local myths.

From Antequera, a longer detour will take you to Málaga on the southern coast. The city is home to spots including the Roman Theatre, the Cathedral of Málaga, and the Picasso Museum.

For a more complete understanding of all the places you will want to see in the region, check out kimkim’s Best of Andalusia: Culture, Nature, and Food 13 day itinerary.

Rental car companies abound in Córdoba, with Enterprise, Budget and Dollar being the highest rated. Remember that non-EU driver’s license holders must obtain an International Driver’s Permit in order to drive in Spain.

Alternately, for a more luxurious transport, hire a private transfer. With a variety of car services available online from mini-buses to luxury cars, prices are variable. You can request scenic stops along the way, including the Anis Museum for lovers of the liqueur or the serene village of Archidona surrounded by olive groves.

ALSA runs buses from Córdoba’s main bus station, Estación de Autobuses de Córdoba to Granada eight times daily. The earliest bus leaves Córdoba at 6 a.m., the latest at 7 p.m. The bus costs significantly less than the train, but can take over double the time (make sure to choose the faster route option with fewer stops). However, the buses do also offer air conditioning, wifi, and individual entertainment screens with a USB portal for charging.

See the very best of Portugal and western Andalucía with a perfect mix...

This 10-day itinerary combines Spain's three most exciting cities with a...