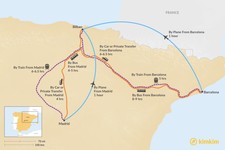 Basque Country is one of Northern Spain’s most scenic and popular regions, well-known for its beaches, architecture, and foodie scene. Getting to the region is fairly easy, with major highways, bus routes, and train services all available. Basque Country is also served by an international airport. This makes it easier to further explore the picturesque area, even on a short time frame like in this five-day itinerary.

Basque Country’s biggest city is Bilbao, which sits in the northwest part of the region. It’s fastest to fly into the city’s international airport, which is possible from both Madrid and Barcelona in just one hour. Trains and bus services are also available, although make for a longer journey.

Spain’s capital city of Madrid is well-connected to Basque Country. Although it’s easy to travel between the two by car, bus, or train, the fastest way to make the journey is by plane. Spain has two airlines that provide flights from Madrid to Bilbao, the largest city in Basque Country. These include Iberia and Air Europa, which both provide numerous daily flights in just one hour.

Buses are also available, following the same route as driving and reaching Basque Country in 4-5 hours depending on departure time. Although it takes a bit longer than the bus, the train is a great alternative if you’re looking for more comfort. The fastest routes are direct and pass through the historic city of Segovia, arriving in Bilbao five hours later. Longer trains connect in Zaragoza, increasing the travel time to 6-6.5 hours.

Once in Bilbao, it’s easy to explore more of Basque Country. Although many prefer to rent a car (thanks to the region’s exceptional rural beauty), regional buses serve many of the cities and popular tourist points. Basque Country also has its own, local train service called Euskotren, which mainly serves the coast line between Bilbao and San Sebastián and the Urdaibai area.

Other places to explore include the historic capital or Vitoria-Gasteiz, the port town of Zarautz on the coast, and Hondarribia on the border with France. The scenic coastal stretch between Getxo and Zumaia—which provides small port towns, dramatic cliffs, and forests—is also a great option for more exploration.

For better details of the journey, check out How to Get From Madrid to Bilbao.

Barcelona is also well-connected to Basque Country and the city of Bilbao. Flying is the fastest option, thanks to Iberia and Vueling Airlines operating numerous, 1-hour flights each day.

Much like Madrid, you can also travel between the two cities via the ground. High-speed trains are your best bet, making the journey in just about five hours. Car rentals and private transfers are also an option, but they take a bit longer at 6-6.5 hours. The fastest route by car is the A-2/A-68 highways, which pass through Zaragoza and Logroño. There is, however, a slightly longer and more scenic option. You can opt for the northern A-2 route, which travels southwest of the Pyrenees Mountains and passes through the picturesque cities of Huesca and Pamplona.

Buses are a budget-friendly alternative, but they are the longest option. Direct routes travel leave Barcelona throughout the day, arriving in Bilbao in 8-9 hours.

For better details of the journey, How to Get From Barcelona to Bilbao is a great resource. For travel between Bilbao and Basque Country, see the previous option.

In a mere five days, you can enjoy an unforgettable Spanish vacation....

Hiking In The Basque Country - 5 Days

Discover the amazing landscapes and diversity of the Basque Country....

Enjoy a gastronomic itinerary from Madrid to San Sebastian and Bilbao,...

In less than a week you can visit the highlights of Spain's northern...