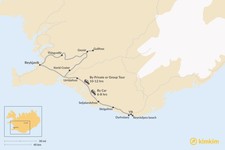 Traveling the 117 miles (189km) from Iceland's Golden Circle to the southern village of Vik is best done by self-driving in order to allow for maximum flexibility and exploration opportunities.

It is possible to arrange for a private tour to view many of the south coast highlights, including the Golden Circle along the journey to Vik. The Golden Circle includes three main highlights, Thingvellir National Park, where you can snorkel between two tectonic plates, Gullfoss, and the Geysir Geothermal area. If driving, it would logistically make sense to do Thingvellir first, followed by Geysir and Gullfoss (in either order) before heading towards Vik.

For a more detailed look at some of the major attractions on this route, check out the Best of Iceland's South Coast & Golden Circle. Plucking some of the ideas from this itinerary will have you at the foot of famous waterfalls, Seljalandsfoss and Skogafoss, marveling at Dyrholaey, and seeing Reynisfjara black sand beach, in addition to the Golden Circle, of course.

Depending which stop travelers depart from, driving directly from the Golden Circle to Vik should take approximately three to three and a half hours, however, it is highly recommended to allow extra time for exploring stops along the way. There is an option to take either Route 35 south to the Ring Road (Route 1), or Route 30 south to the Ring Road (Route 1). They both take about the same time, however, the first option passes by Kerid Crater, and the second option passes by the natural hot spring, Hrunalaug.

After getting your fill of the Golden Circle, take some time to explore on foot, by hiking in Thorsmork or above Skogafoss, or venturing to Seljalandsfoss' neighboring waterfalls, including Gljúfrabúi, hidden in a cave. Once near Vik, make sure to check out the basalt rock columns at Reynisfjara beach.

By Private or Group Tour

It would be possible to hire a driver and make the journey on a private tour within a full day if based near one of the Golden Circle highlights, but spreading it out over two days would be a little more relaxed for optimal enjoyment. Since most group tours depart from the airport in Keflavik, or downtown in Reykjavik, it wouldn't be possible to start and end in the Golden Circle.

Explore the best of the west and south with this 7-9 day itinerary. Hike...

This 7-day itinerary will take you to the north, away from the crowded...

With 10 days on the road, you can discover a variety of regions and...

For road trip enthusiasts, it doesn't get much better than encircling...

This epic 12-day road trip is a perfect way to absorb Iceland as you...

K
Karen A.
Connecticut, United States
"Trip of a lifetime! sigurdur was attentive, and made sure an excursion was rescheduled when it was cancelled due to weather, so we could make sure we got in ..." read more
Traveled to Iceland as a couple in June, 2022

Frank H.
Virginia, United States
"The entire trip was well planned in an excellent, courteous, collaborative working relationship with Preeti. She sought to meet our desires and wishes for..." read more
Traveled to Iceland as a couple in June, 2022

Michelle L.
Minnesota, United States
"Terry planned a fantastic trip for us! My partner just finished 12 years of medical training, and this trip was to celebrate his amazing accomplishment..." read more
Traveled to Iceland as a couple in June, 2022
B
Brandon P.
Virginia, United States
"Amazing trip! Iceland is a magical place full of kind people, great food, and incredible landscapes. We will come back some day is there is still so much ..." read more
Traveled to Iceland as a family in June, 2022

Deann M.
Florida, United States
"Our trip was amazing! I cannot thank Jenny enough for not only picking great destinations but really listening to what we are interested in a building an iti..." read more
Traveled to Iceland as a family in June, 2022

Thomas M.
California, United States
"Preeti was excellent.... everything was memorable couldn't ask for better person to handle everything " read more
Traveled to Iceland as a couple in June, 2022
Plan your trip to Iceland
Customize your trip with help from a local travel specialist
Plan Your Trip