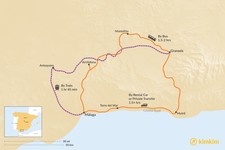 The distance from Granada in western Andalusia to the port city of Málaga on the Costa del Sol is about 56 miles (90 km). The most comfortable way to get from Granada to Málaga is by hiring a private transfer or driving a rental car. The ride only takes about 1.5 hours and offers some great places to stop along the way.

Public transport is also available between the two cities. Buses and trains both take between 1 hour and 30 minutes to 2 hours, but buses are much more frequent and cheaper.

While you're in the region, make sure to use kimkim's 13-day itinerary Best of Andalusia: Culture, Nature, and Food.

Driving from Granada to Málaga takes about 1.5 hours on the most direct route following the A-92 highway. The driving distance is closer to 80 miles because the quickest route cuts west and then south, instead of being a straight diagonal.

Alternatively, you can head south first on the A-4 and then west along the coast on the A-7. This route will add about 10  minutes to your journey but will allow you to have a scenic seaside ride and open up some great places to stop like the resort towns of Motril and Torre del Mar.

Rental car companies abound in Granada. Remember that non-EU passport holders will need an international driver's license to drive in Spain. For more reasons to opt for driving yourself, check out the Ultimate Andalusian Road Trip.

For a more luxurious option, consider hiring a private driver or taxi. Many will include side-trips to some unique places like Montefrio, a white-washed town featuring a former Moorish fortress, or Archidona, another historic town famous for its Baroque heritage.

ALSA operates hourly buses between Granada (Granada Bus Station) and Málaga (Málaga Bus Station or Málaga Airport). Some of the buses make multiple stops along the way, which increases travel time. Note that Granada's bus station is located on the outskirts of the city, about 2 miles from the main plaza, Plaza Nueva.

Tickets can be purchased on ALSA’s website, or at the bus station. The online fare includes a small processing fee. Booking in advance is recommended, as buses occasionally sell out. You will be able to choose between normal buses and “Supra Economy” buses, which offer Wifi and entertainment for a slightly higher fare.

While there are no direct trains from Granada to Málaga, Renfe operates one or two trains daily between Granada (Granada Train Station) and Málaga (Maria Zambrano Station) that transfer in Antequera. The entire trip will take about 1 hour and 45 minutes, similar in time to the bus but slightly more costly.

Tickets can be purchased online or at the train station. However, it is advisable to purchase tickets online, in order to avoid an additional booking fee applied at the station. Trains can get crowded around public holidays, so book in advance.

The official Renfe website sometimes has trouble processing non-Spanish credit cards. If you run into any problems when booking, a number of third-party websites exist on which you can book your train ticket.

With a little over two weeks to spare, you can experience the highlights...

The standard two-week vacation is more than enough time to experience...

Due to its abundance of natural beauty and historic cities, Spain's...