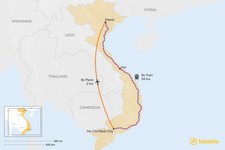 Vietnam's two major cities, Ho Chi Minh City in the south and Hanoi in the north, are about 1,000 miles (1,600 km) apart. The easiest way to get to Hanoi is a direct two-hour flight, and there are multiple flights out of Ho Chi Minh City's Tan Son Nhat International Airport each day.

However, if you have a particular interest in learning more about Vietnam's history and seeing the countryside, you may wish to consider booking a scenic and culturally symbolic 34-hour train journey with views of towering mountains, banana trees, and ancient temples.

If you're interested in further exploring northern Vietnam's pagodas, terraced rice paddies, and the famous Halong Bay, then check out our 7-day itinerary.

The Tan Son Nhat International Airport is conveniently located just four miles outside of the center of Ho Chi Minh City, but it's prime location also makes it the busiest airport in Vietnam with an estimated 32 million travelers per year, so make sure you budget enough time to navigate your way through the lines in order to catch your two-hour flight to Hanoi's Noi Bai International Airport.

History buffs may want to book a 34-hour train ride to Hanoi on Vietnam's national railway system known as the Reunification Express.

This celebratory train line was named the Reunification Express in 1976 because it unified the formerly divided north and south after the long conflict in Vietnam came to a close. This historically significant ride will take you along the coast, through miles of jungle, and even directly through the middle of small villages.

Four trains depart from Ho Chi Minh City's central station each day. Consider booking first-class tickets (Soft Berth) for extra comfort and room in your sleeping cabin, and be aware that you can break up the trip by getting off at stops to explore sites like the Van Long Nature Reserve or the former capital city of Hue, which has grand imperial monuments and palaces.

How to Get to Sapa

How to Get from Hoi An to Halong Bay

How to Get from Hanoi to Ninh Binh

How to Get from Ho Chi Minh City to Can Tho

How to Get from Hanoi to Pu Luong Nature Reserve

The ecotourism destination of Pu Luong Nature Reserve is 95 miles (145...

How to Get to Ba Be National Park

Located in Bắc Kạn province, Ba Be National Park is around 150 miles...

How to Get to Mekong River Delta

The Mekong River Delta in southern Vietnam is one of the most...

How to Get from Hanoi to Bai Tu Long Bay

If you're looking to explore the under-the-radar cousin of Vietnam's...

How to Get from Hue to Halong Bay

How to Get from Hanoi to Halong Bay

If you're looking to make the 108-mile (174 km) journey from Hanoi to...
Getting Around Vietnam

See all the classic highlights on this nine-day trip to magical Vietnam....

This tour takes you around the major highlights of Vietnam, but along...

Travel from the mountains of the north through the history of Vietnam...

Vietnam Off the Beaten Track - 14 Days

Spend 13 days exploring some of the far corners and favorite cities of...

This five-day excursion is the perfect chance to visit a side of Vietnam...

Explore the highlights of Vietnam from its southern cities to its...

Head from Hanoi up into northern Vietnam for six days of highland...

Led by a local guide, this weeklong bike trip begins in Vietnam's...

Sarah F.
Georgia, United States
"Camellia did such a great job planning our ideal Vietnam trip. She listened and really took into account everything we wanted to do and see and made the perf..." read more
Traveled to Vietnam as a group in June, 2022

David B.
the United Arab Emirates
"KimKim has helped us to make our trip unforgettable, they have managed to provide us a fabulous trip with less than 7 days in advance and the entire trip has..." read more
Traveled to Vietnam as a family in April, 2022