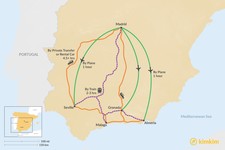 The distance from Madrid to the province of Andalusia is about 280 miles (451 km). The most comfortable way to get from Madrid to Andalusia is via a direct, one-hour flight to Seville or another of the region's major cities. You can also drive (or hire a private transfer), which takes 4.5 hours or more with a stop in historic Toledo. Bus and train routes are also available.

If you want to experience both the bustling capital city of Madrid and Andalusia’s history and traditions, you can combine the two in this exciting ten-day itinerary.

Flying is the fastest and easiest way to get from Madrid to Andalusia. There are five cities with international airports in the province of Andalusia: Seville, Malaga, Almeria, Granada, and Jerez. All are served by direct flights from Madrid, with most fares costing under 100 euros. Flights are operated by Air Iberia and Air Europa.

The route from Madrid to Andalusia runs through Castille-La Mancha. While the scenery is rather flat and dry, you may see some traditional Spanish windmills made famous in Miguel de Cervantes' novel Don Quixote. Another interesting landmark to watch out for is the Osborne Bulls—once used for advertising by a sherry company, these 46-foot (14 m) bull-shaped billboards can be seen at the side of highways across Spain.

If you have time for a sightseeing stop on the drive down to Andalusia, consider visiting Toledo. This historic city is the capital of Castille-La Mancha, and a UNESCO World Heritage Site.

Private transfers can be booked to drive you directly from your hotel or from Madrid airport to your preferred destination in Andalusia. If you prefer to self-drive, many major rental car companies exist in Madrid, including Europcar.

Companies like BlaBlaCar offer long-distance rideshares from Madrid to various cities in Andalusia. Prices vary, but are usually under 50 euros. Be aware of Spanish public holidays when booking, as this may affect availability.

Tickets can be purchased online or at the train station. However, it is advisable to purchase tickets online, in order to avoid an additional booking fee applied at the station. Trains can get crowded around public holidays, so book in advance.

The official Renfe website sometimes has trouble processing non-Spanish credit cards. If you run into any problems when booking, a number of third-party websites exist on which you can book your train ticket.

With Socibus, you will be able to choose between Basic and Plus buses. The Socibus route from Madrid to Cordoba/Seville makes a 30-minute pit stop along the way, where you will have the opportunity to buy food or use the toilet. The stop is several hours into the journey, closer to Andalusia.

ALSA also offers a choice between Regular and Premium buses on some routes. Booking in advance is recommended, as buses occasionally sell out.

How to Get from San Sebastian to Bilbao

San Sebastian and the port city of Bilbao are two essential stops in...

How to Get from Seville to Ronda

Ronda, the city set in the mountainous region of Málaga, is a quick 79...

How to Get from Seville to Málaga

The distance from Seville (Sevilla) in western Andalusia to the port...
Getting Around Spain

See the jewels of Madrid and Andalusia with this 10-day itinerary. ...

Discover the highlights of Andalucía, from the Mediterranean coast in...