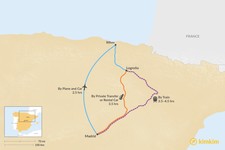 Madrid, Spain’s capital city, is located about 200 miles (329 km) from the wine region of La Rioja. Getting from one city to the other is relatively easy, with the combination of air travel and driving being the quickest mode of travel.

There are several flights a day from Madrid to Bilbao, which is home to the closest major airport. Flying time is about an hour, and from there you can rent a car or take a private transfer to La Rioja’s capital city of Logroño, a drive of about 1.5 hours, making for a total travel time of about 2.5 hours.

The second fastest route would be to drive directly from one city to the other. The drive from Madrid to Logroño is about 3.5 hours and you’ll have the opportunity to explore the countryside and stop in at some of the other cities along the way.

The slowest option for travel from Madrid to La Rioja would be by train. Trains run daily from Madrid to Logroño and take anywhere from 3.5 – 4.5 hours depending on train speed and transfers. There are also trains that go to Haro, a smaller town in La Rioja that still has plenty of amenities, but the trains do not run as often and usually have at least one transfer.

This 10-day Food and Culture tour of Basque country incorporates not only some of the best sights in Madrid, such as the Arab Wall and the Royal Palace, but also has excursions to Toledo, wine tastings in La Rioja and a visit to the Guggenheim museum in Bilbao. If you want to add to your itinerary, consider this tour of Barcelona and Madrid, where you can stroll Madrid’s Puerta del Sol plaza and sample some of the city’s delicious cuisine via a gourmet walking tour, as well as seeing the sights of Barcelona and enjoying a day trip to the Costa Brava.

Madrid-Barajas airport is located about 11 miles (18 km) from the city center, about a 15-minute taxi ride. There are multiple daily flights from Madrid to Bilbao, which is the largest major airport in La Rioja. Upon your arrival in Bilbao, the drive to Logroño is about 1.5 hours, traveling via the AP-68 and connecting to N-232. You can also fly directly from Madrid to Logroño, but flight availability between the two cities is very limited.

From Madrid, you’ll head out on M-23 and connect to N-111, which takes you into Logroño. The drive takes you through the city of Guadalajara, home to historic sites such as the Palacio del Infantado and the Patheon of the Condessa de la Vega del Pozo. You could stop here for a rest and a light snack, or continue on and take a break in Soria, two hours from Madrid and where you can visit the remains of the Monastery of San Juan de Duero, built in the 12th century, or stroll the Alameda de Cervantes, a popular green space in the city center.

Trains run from Madrid’s Atocha station to Logroño on a regular basis. There are some nonstop trains that take around 3.5 hours, but most require at least one transfer and take closer to 4.5 hours. There are also trains that go to Haro, part of La Rioja and 21 miles (35 km) from Logroño, but all require at least one transfer and take between 5 – 7 hours. Train tickets can be purchased in advance or at the station, but advance purchase is recommended to guarantee your seat.

In a mere week, you can enjoy the perfect family holiday in Spain. This...