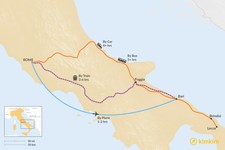 235 miles (378 km) separate Rome from Puglia in the far south of the country. The “heel” to Italy’s boot, the region’s rugged countryside and magnificent beaches put it high on the list of many Italian itineraries, with excellent rail links and quick flights connecting the two in just a few hours.

Traveling by train is the most straightforward way to reach Puglia from Rome. High-speed trains arrive at the northern capital of Bari in under four hours, and the southern city of Lecce in just over five. Though the journey is a little slower than flying, the modern, comfortable trains and minimal steps to the journey make it the most convenient.

Flying is the fastest option, with budget carriers serving routes into Bari and Brindisi, through transport to and from the airports adds another step and added time. While a rental car is the best way to see the Puglian countryside, driving from Rome takes between four and six hours, and it’s often more time-efficient to fly or take the train and rent a car upon arrival. Buses make the trip daily but with a journey time of five to seven hours, buses are by far the slowest way to make the trip.

Discover more of Puglia’s highlights and charms with our 10-day itinerary, or plan your next trip around our guide to the region’s best beaches.

The train is the easiest way to reach Puglia from Rome, with Trenitalia’s direct, high-speed Frecce line connecting the region’s larger cities. Trains leave from Rome’s central Termini station and reach Foggia in 3 hours, Bari in 4, Brindisi in 5, and Lecce in 5.5. The stations in these cities are all walkable from the centers, and depending on your itinerary, each provides a good base for exploring the nearby areas. Frecce tickets can be booked ahead online—always a good idea when traveling during high season and holidays. Trains are modern, with air-conditioning, wifi, and dining options.

Once in Puglia, the four local regional railways connect smaller cities and towns. Be prepared that timetables are not as reliable or punctual as Trenitalia’s, with limited holiday and Sunday service. Tickets can be bought online or at the stations.

Flying is the fastest way to reach Puglia from Rome but requires the extra steps of transport to and from the airports, as well as the added time required for early check-in. Bari (BRI) and Brindisi (BDS) are the region’s two major airports, both served by budget carriers as well as Alitalia.

Puglia’s size and remoteness mean it’s best explored by car, but due to the long drive from Rome, it often works best to travel by plane or train then rent a car upon arrival. If you’re not daunted by the idea of navigating Roman traffic and Italian autostradas, there are multiple routes to reach the region from Rome—depending on your destination, most cities in Puglia are a 4 to 6-hour drive.

Following the A1/E45 to E845 route offers some of the best sightseeing options— passing through Lazio, Campania, and Basilicata. A great place to stop to get a bit to eat midway is either Ristorante Nunzia or Trattoria Il Cinghiale, both located in Benevento.

The route generally heads south from Rome, skirting Naples before turning east, allowing for side-trips or stop-overs at Paestum, Potenza, and Matera before reaching Taranto and Puglia’s Ionian coast. Once in Puglia, it's certainly worth checking out a few of its iconic beaches.

Alternately, drivers can cut across Campania to the scenic Autostrada Adriatica, which winds its way down the eastern coast towards Bari, Brindisi, and Lecce.

Parking is usually easiest in public lots just outside most towns and villages, and make sure to watch out for the restricted ZTL zones in cities and historic centers.

The bus is the most economical option but also the slowest, with carriers FlixBus and Marrozi departing from Rome’s Tiburtina station and arriving at the capital of Bari in just over 5 hours. Brindisi is a further hour down the coast, with Lecce another 40 minutes south.

While the bus is the least efficient way to reach Puglia from Rome, the local bus lines do provide good connections within Puglia, allowing travelers to reach some popular destinations not served by rail, such as Alberobello, Vieste, and Otranto. Lines vary by region, with STP and SITA serving some of the busiest areas. There’s generally no buses running on Sundays or holidays outside of bigger cities, so be sure to check timetables carefully.

Traveling from the Tuscany region of Italy down to the southern region...
Getting Around Italy