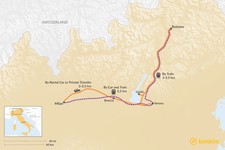 The Dolomites Mountains are part of the Southern Limestone Alps and include the provinces of Belluno, South Tyrol, and Trentino. Depending on what parts of the region you plan to visit, the city of Milan is anywhere from 172 miles (278 km) to about 225 miles (360 km) away, with South Tyrol being the closest and Belluno being one of the furthest provinces.

The quickest way to get from Milan to the Dolomites would be by car. The drive is just over three hours to the South Tyrol region, and takes you through the town of Brescia and along Lake Garda in the Lakes District.

The second fastest option would be a combination of driving and taking the train. From Milan, you can drive to the city of Verona in about two hours, then take a direct train from Verona to the town of Bolzano in South Tyrol, which takes about 1.5 hours.

You can also travel exclusively by train, which is the slowest option, but also can be one of the most scenic and relaxing. There are trains that run from Milan all the way to Bolzano and take from 3.5 - 4 hours, as well as to the province of Belluno, which takes between 4 - 4.5 hours.

This 5-day tour of Milan and Northern Italy showcases the art and history of the region, including sights such as Milan’s Royal Palace and Porta Genova. And if an adventurous trek in the Dolomites sounds like the perfect vacation to you, check out this Dolomites High Traverse tour, which takes you through the Torre di Toblin and the famous Tre Cime mountain group.

From Milan, you’ll take the A51 and connect to the A4/E45 to Via Statale 12, which takes you to Bolzano. The town of Brescia is about an hour into the journey and can be a great place to stop for a snack or to explore some of the sights. I Dù dela Contrada, in the heart of downtown, is a great option for a restaurant with a homey feel serving traditional Italian food. Brescia is also home to the Duomo Nuovo and the ancient Capitoline Temple, which was built in 73 AD and is an excellent example of Roman architecture. You can also stop along Lake Garda, which is about a 40-minute drive from Brescia and just under two hours from your destination.

The two-hour drive from Milan to Verona involves taking the A51 and connecting to the A4 into the city. When you reach Verona, you’ll be able to catch one of the several nonstop trains from Porta Nuova rail station to Bolzano, which takes about 1.5 hours. You may also want to consider planning your itinerary around spending some time in Verona. One of Italy’s most historic cities, Verona is known for being the setting of Shakespeare’s Romeo and Juliet and you can visit the home said to have inspired his famous play. You can also stroll the Piazza Bra and see the Verona Arena, a Roman amphitheater originally built in 30 AD and still used today.

Milano Centrale station has several trains a day to Bolzano, as well as other towns in the Dolomites such as Belluno. Most of the trains to Bolzano connect through Verona, with a travel time of about 3 - 3.5 hours. From Milan to Belluno, the train takes about four hours and has connections through Padova and Montebelluna. The trains usually have meals or snacks available for purchase, with options ranging from full service food/bar cars to small carts with light fare.

How to Get from Venice to the Dolomites

After enjoying the sights of Venice, why not head north for a completely...

Explore Northern Italy's cities and landscapes in this packed five-day...

On this seven day trek, you'll encounter some of the world's most...

Explore the best of Northern Italy on this 5-day trip to Milan and Lake...

Susan M.
New York, United States
"Jessica was always ready to answer questions and work with us as we changed our original plan to the final one. The private tour guides arranged for us fo..." read more
Traveled to Italy as a couple in October, 2022
S
Shane B.
Colorado, United States
"Our family cannot say thank you enough to Tasos and the KimKim team. Tasos worked with us to create a vacation that exceeded all of our expectations. Tasos..." read more
Traveled to Italy as a family in July, 2022
Create your custom-made trip to Italy
Get Started