This sightseeing tour begins west of Kathmandu City and a short distance from the popular tourist district of Thamel, in a place called Swayambhunath, also known as the "monkey temple." Sitting on a hill overlooking the city as well as Kathmandu Valley, Swayambhunath is really a holy place and pilgrimage site for Nepal’s Tantric Buddhists. The site is filled with ornate temples as well as an impressive dome-shaped stupa (shrine) in the center. It's also home to hundreds of monkeys who are also considered sacred to the local Buddhists.

The tour continues back in Kathmandu at Durbar Square. This public space houses an eclectic mix of architectural styles, from sixteenth-century pagoda temples to the neo-classical Gadi Durbar Palace. It’s particularly atmospheric in the evenings when locals come to worship at the temples. The square suffered severe damage during the 2015 earthquake but is slowly being restored. This is also the location of the "House of the Living Goddess" where the virgin goddess known as Kumari resides. Sometimes she even appears in one of the exquisitely carved windows of the upper floor. 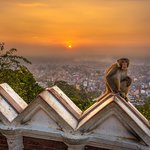 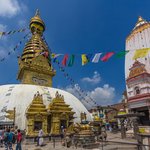 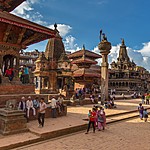 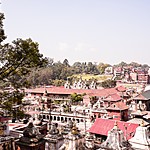 Embark on a full-day tour of the Kathmandu Valley with an...