Experience the best of Slovenia and Croatia on this in-depth tour. Beginning in Zagreb, you'll work through Slovenia from relaxed Ljubljana to its pristine lakes and rugged mountains of Triglav National Park, before turning your attention to Croatia's Istrian Peninsula and the Dalmatian Coast. You'll wander ancient Roman ruins and medieval town centers, dine on fresh seafood and traditional Central-European fare, and climb centuries-old ramparts and parapets. 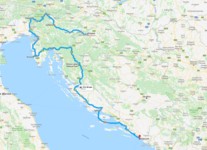 Head off on an unforgettable adventure as you cover the best of Croatia and Slovenia in two weeks, starting in Zagreb. You'll cross borders to overnight in the capital of Ljubljana before venturing through the breathtaking scenery of Triglav National Park, the Soča Valley, and the Karst region. Your trip culminates along Croatia's Adriatic coast, from the Istrian Peninsula in the north through to the fortressed city of Dubrovnik in the south as well as Plitvice Lakes, Split, and Hvar in between.

This 14-day adventure covers the highlights of Croatia, from the north to the south and the Dalmatian Coast to the inland national parks. You'll leave no stone unturned as you stroll the cobbled streets of ancient cities like Split and Dubrovnik. You'll also discover the culture and history of the country on a tour of Zagreb, partaking in a cooking class, and visiting the stunning waterfalls at Plitvice and Krka national parks.

Other durations: 11 days · 12 days · 14 days · 15 days · 16 days
Plan your trip to Croatia
Customize your trip with help from a local travel specialist
Plan Your Trip