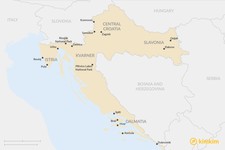 When you picture Croatia, chances are you're thinking of Dubrovnik and the Dalmatian Coast first. But this popular area is only one of the country's five regions, each one of them worth a trip on its own. From mountains and national parks to beaches and islands, from cities to tiny villages, here's where (and when) to get the most out of Croatia.

Plitvice Lakes National Park is Croatia’s most popular attraction with over 1.1 million visitors in 2015 and even more visitors expected this year. Its popularity is no surprise, since Plitvice is a unique natural wonder with its 16 terraced crystal clear lakes and 90 waterfalls. In the summer months the park and its trails can get busy, but with the tips in this article you can avoid most of the crowds. 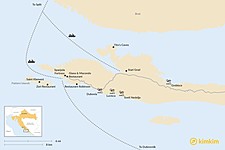 Known for beautiful year-round weather, crisp white and robust red wines, summer nightlife, clear turquoise waters—and active outdoor excursions like kayaking, cycling, and rock climbing, Hvar has become one of the most visited islands in Dalmatia. It's surrounded by stunning scenery and is rich in culture (it is the only island in the world with four UNESCO World Heritage Sites) where one can easily escape and find the perfect relaxation they need.

A bustling port city with its Old Town built into the alleys of the 1600 year old Diocletian’s Palace, Split is full of cafes, restaurants and galleries. Split is the 2nd largest city in Croatia, and its history and atmosphere make it a one of a kind place to visit.

Korcula is one of our favorite islands because it offers different activities for every type of traveler. Korcula may be less crowded than Hvar but it does not lack in the vast amount of activities it has to offer. Whether you are cycling around the island, or prefer swimming in hidden beaches, taking a windsurfing lesson, or spending the day wine tasting the local Grk wine - you’ll be wishing you had more time to spend here! Here are some ideas below on how to make your trip to Korcula worth your while.

Fairytale like, Dubrovnik is a charming coastal city known as ‘The Pearl of the Adriatic’. A UNESCO World Heritage site, it is one of the most photographed cities in Croatia. With its ideal location (in southern Croatia) overlooking the clear blue Adriatic, with unspoiled beaches, casual bistros serving top notch seafood, it makes Dubrovnik one of the most unique walled cities worth visiting in Croatia. 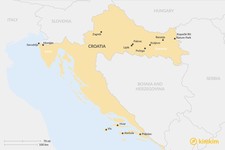 Istria, one of Croatia’s premier winemaking regions, was named one of the 2015 World Top 10 travel destinations by Wine Enthusiast magazine. But Istria is just one of the dozens of wine-producing locations in Croatia. Because of its small geographically-defined nature, the wine regions offer many tours and tastings, most of which are accessible by bike, a perfect way to sip your way through some of the country’s best wine.

Dalmatia encompasses Croatia’s western border with the Adriatic Sea, running roughly from the island of Rab just below the Istrian peninsula to the Bay of Kotor in Montenegro. From historic cities and quaint mountain towns to tucked-away beaches and sprawling vineyards, there's a lot to do and see on the many islands that dot the coast. Here’s a guide to the region's top five islands to get you started—Hvar, Brač, Korčula, Vis, and Mljet.

The Istrian peninsula doesn’t quite feel like the rest of Croatia, and there's a good reason for that—it's been part of the Venetian Republic, Italy, and the Austrian Empire, depending on the century. History has given it many faces, and that’s good news for visitors. You can cycle through its cities, towns, and natural areas to take in Roman architecture, pristine beaches, and singular cuisine—sometimes all in one day.

Brač is Croatia’s third-largest island, the biggest in Dalmatia, and among the closest to the mainland. It's also a great choice for active pursuits: stellar windsurfing, any type of watersport under the sun, cycling, and hiking. Base yourself in the main towns of Bol and Supetar, or venture inland to the ancient stone hamlets at Brač's center—there's plenty to do and see throughout. Learn more about what, when, and how to go below.

A national park like no other, Kornati is an archipelago just off the Dalmatian Coast. With few year-round residents, they offer a rugged landscape and breezy beaches with sparkling waters. They may not be a breeze to get to, but they’ve charmed visitors for centuries with their remote “desert island” feel. Thanks to Croatia’s newfound popularity, taking a tour through the 140 islands (89 of which belong to Kornati National Park) is easier than ever.

Ultimate Guide to the Pelješac Peninsula: Rugged Beauty in Croatia

If Dubrovnik seems a bit too hectic for you these days, consider driving an hour up the coast for a true holiday on a rugged peninsula that’s still flying well under the radar. Though close to Croatia’s most beloved city, Pelješac is still largely free of crowds. That means you’ll have its charming old villages, unspoiled wine country, pebbly beaches, and laid-back restaurants all to yourself, at least for a little while longer.

If you came to Croatia to visit Plitvice Lakes National Park, but then found that you couldn’t go swimming there, Krka National Park is your answer. Krka has waterfalls aplenty, flowing from the Krka River, and unlike at Plitvice, they are free for a dip. The park is also home to a wide array of flora and fauna, as well as some unique cultural sights, all with fewer tourists than the now-renowned Plitvice. Read on for information on how to make the most of your trip to Krka.

Create your custom-made trip to Croatia
Get Started