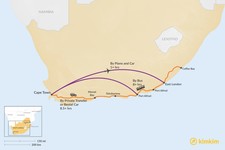 Traveling between Cape Town and the Eastern Cape can take anything from one hour by plane to two days by car. The distance also depends on where about in the Eastern Cape, which is the third biggest province in South Africa, you are traveling to.

Traveling by plane, to either Port Elizabeth or East London, offers great convenience. After arriving in one of these airports, you can either self-drive or use a private transfer to get around the province. Traveling by rental car or private transfer the whole way is also a great option for those hoping to explore more of the country. This trip can range between eight hours to two days—depending on whereabout you are traveling to. Technically, there is also the option to take the bus to Port Elizabeth or East London, although this isn’t recommended.

This 21-day itinerary includes the Garden Route, Oudtshoorn, the Wild Coast, and more.

The two main airports in the Eastern Cape are in Port Elizabeth and East London. There are three other, smaller airports, closer to the Wild Coast region in Mthatha, Bisho, and Queenstown. Since there are no direct flights between Cape Town and the smaller airports—it may be more convenient to fly to Port Elizabeth or East London and traveling by car for the rest of the way.

All of the airports have the option of car rental. Alternatively, travelers can use a private transfer to get around the province.

You can expect the drive to take at least eight hours—to get to towns like Port Elizabeth or Graaff-Reinet—which can be done in one day. However, those traveling further along the coast to spots like Hole in the Wall or Coffee Bay, need to factor in at least two days of driving.

The best route when traveling by car is along the N2 highway through the Garden Route. Good places to explore on the Garden Route include Knysna, Plettenberg Bay, Addo, the Tsitsikamma region, and more. Those who opt for this route need to keep cash or a credit card accessible for pay tolls.

Those traveling inland will drive along the N1 highway and R60. This route takes travelers to Nieu Bethesda, Mount Zebra National Park, or Graaff-Reinet. This drive can also be done along the R60 and R62. Oudtshoorn and Barrydale are great places to visit en route.

After arriving in the Eastern Cape, travelers should be aware of traffic congestions and holes in the road, particularly in the Wild Coast region. Certain areas like Addo and Nieu Bethesda have gravel roads.

This travel option is not recommended. The main bus terminals are in Port Elizabeth and East London. Travelers should be aware of bus delays which may make the trip longer. After arriving in the Eastern Cape, those traveling further can arrange private transfers.

Plan your trip to South Africa

Plan your trip to South Africa

Getting Around South Africa

How to Get from Cape Town to Kruger National Park

How to Get from Johannesburg to Kruger National Park

Traveling from Johannesburg to Kruger National Park can take anything...

How to Get from Cape Town to Hermanus

How to Get from Cape Town to Johannesburg

How to Get from Johannesburg to Drakensberg

The quickest way to get between Johannesburg and the Drakensberg is by...

How to Get from Johannesburg to Eastern Cape

The travel time from Johannesburg to the Eastern Cape, South Africa’s...

How to Get from Johannesburg to Limpopo

How to Get from Johannesburg to Garden Route

Your best option, when traveling between Johannesburg and the Garden...

How to Get from Cape Town to Oudtshoorn

The distance between Cape Town in the Western Cape to the Klein...

How to Get from Cape Town to Drakensberg

The quickest way to travel the 900 miles (1448 km) between Cape Town and...
Getting Around South Africa

This tour takes you from the sights of Cape Town to the lush Overberg,...

Spend 10 days taking in the Western Cape with this trip plan. You'll...

Delve into South Africa's rich cultural heritage through its diverse...

Take a two-week adventure from one of the world's highest bungee jumps...

Take two weeks to see some of the most famous spots in South Africa on...

Take a 10-day trek through the tales of South Africa with this trip...

This 10-day itinerary is the ultimate introduction to South Africa for...

Experience one of the most beautiful parts of the world as you make your...

P
Parinaz A.
California, United States
"First we were so skeptical cause we didnt know kimkim.com. Now that we are back, we have been recommending to everyone ! We had an amazing time. Everything w..." read more
Traveled to South Africa as a family in November, 2022

Mike L.
Georgia, United States
"Petru did a great job organizing the trip for us. She was responsive and available throughout the entire booking process as well as when we were in country. ..." read more
Traveled to South Africa as a couple in August, 2022

Brad P.
Canada
"thank you Lize and the Kimkim team and our wonderful knowledgeable guides. Rehana and Leisel for a fantastic trip . The experiences from the hike up Table M..." read more
Traveled to South Africa as a couple in August, 2022

Kenneth D.
Texas, United States
"This was our first time working with a travel agent, so we went into it with apprehensions. Taf and her team were exceptional at planning out our trip, givin..." read more
Traveled to South Africa as a group in July, 2022
M
Mark D.
Utah, United States
"Lize did a good job. Some suggestions in hindsight: At Victoria Falls, I recommend doing both sides of the falls. Pioneer Lodge is very good. The trip to..." read more
Traveled to South Africa as a couple in July, 2022
Create your custom-made trip to South Africa
Get Started