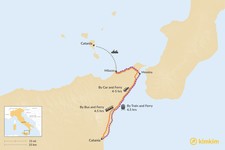 Traveling from Catania to the island of Lipari requires taking a ferry from either Milazzo, the more popular ferry port (81 miles/130 km from Catania), or Messina Marittima (60 miles/97 km from Catania). You can drive or hire a taxi or private driver to get to your chosen port. You can also take a train to either ferry port.

From mid-April through the end of September, you have another choice; Giuntabus offers direct bus service from Catania Fontanarossa Airport to the port of Milazzo. The airport is a convenient place to rent and drop off a car, which makes the Giuntabus option an attractive one. (Note that Milazzo, Messina, nor Lipari do not have airports, so air travel is not an option.)

Sicily is home to many gorgeous beaches and to archaeological treasures that date back to ancient times, when the island was a Greek colony. Consider adding some stops to your trip from Catania to Lipari. You'll find some of Sicily's finest Greek ruins in Taormina, and Sicily's oldest Greek ruins are located outside of nearby Giardini-Naxos.

Both Taormina and Giardini-Naxos are popular with summer beachgoers. A journey from Catania to Lipari could also be part of a 9-day trip to Catania, Mount Etna, and the Aeolian Islands or an extension of a Best of Sicily itinerary.

Before you leave Milazzo, if that is your chosen departure port, explore some of the city's many churches, or visit Milazzo's castle, Sicily's largest. (Tip: If possible, hire a private driver, not a taxi, to go up the hill to the castle if you don't have a car and don't wish to walk.)

By Car and Ferry

From Catania, take the A18/E45 toll highway toward Messina. In Messina, this highway becomes the A20/E90. Continue to Milazzo via the A20/E90  and Strada Provinciale 67 (SP67). Liberty Lines ferries depart Milazzo for Lipari several times daily, all year. The 24-mile (39 km) trip will take 1.75 to 2.5 hours, depending on which departure you choose.

If you prefer to depart from Messina Marittima, take the A18/E45 toll highway to Messina. Continue on the A20/E90 to Messina-Boccetta, and follow signs to Traghetti (Ferries). Liberty Lines offers five departures daily for Lipari in the summer months (late June – end of August), and one daily departure during the rest of the year. You will need to pay a small ecopass fee if you drive near the ferry port. The 54-mile (87 km) journey should take about two hours.

Take care to avoid the Zona a Traffico Limitado (ZTL), or limited traffic zone, in Catania and Milazzo. This driving zone is restricted to local drivers with official permits. If you drive in the ZTL, even accidentally, you will get a ticket.

By Train and Ferry

Trenitalia trains connect Catania with Milazzo. You must change trains at Messina Centrale Station in Messina. Milazzo's train station is about two miles from the ferry port. Azienda Siciliana Trasporti (AST) buses run between the train station and the port every day except Sundays. On Sundays, taxis are your best alternative, although they are very expensive. Liberty Lines ferries connect Milazzo and Lipari; there are several departures daily, all year.

If you would like to take the ferry from Messina, you will need to change trains at Messina Centrale Station and proceed to Messina Marittima Station. The ferry port is a short walk from the station. Liberty Lines ferries depart from Messina Marittima five times daily in the summer months and once daily during the rest of the year.

By Bus and Ferry

Liberty Lines offers many departures from Milazzo to Lipari each day, regardless of the time of year.