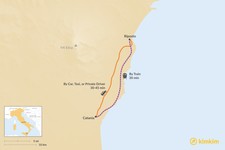 Because the journey from Catania to Riposto is so short, consider stopping to see some of Sicily's coastal sights along the way, perhaps as part of an 8-day journey along Sicily's East Coast. Aci Castello, which is just a few miles from Catania, is home to Aci Castle (Castello di Aci), a Norman castle that dates back to the early 11th century. The coastal area that stretches from Aci Castello to Acireale includes the Cyclops Islands Marine Protected Area, several enticing beaches, and the town of Aci Trezza.

From Aci Trezza, you can take a glass-bottomed boat trip, rent a bicycle, or simply sit by the water and enjoy the view of the Faraglioni, a group of offshore rock formations that, according to legend, the Cyclops Polyphemus threw at Odysseus and his crew as they fled after blinding the one-eyed monster.

Away from the coast, Mount Etna, Italy's largest active volcano, is not far from Riposto.

Trenitalia trains connect Catania and Giarre-Riposto Station. From the station, it is a 10-minute taxi ride to Riposto's waterfront.

By Car, Taxi, or Private Driver

Taking the A18/E45 toll highway is the fastest way to get from Catania to Riposto. After you exit the A18/E45, you will take a series of state and provincial roads, including Strada Provinciale 41 (SP41), Strada Statale 114 (SS114), and SP 117 to Riposto.

As you leave Catania, remember that this city has a Zona a Traffico Limitado (ZTL), which is a limited traffic zone restricted to local drivers with approved permits. If you drive into the ZTL during restricted hours, you will get a ticket. Riposto also has a ZTL in its Torre Archirafi neighborhood during the summer months. Some of the coastal towns between Catania and Riposto also have ZTLs during the summer tourist season. There are a few fixed speed cameras along your route, too. If you do not want to worry about ZTLs, speed cameras, and driving in traffic, taking a taxi or hiring a private driver to get from Catania to Riposto might be your best option.

Cliff diving is the national pastime in Sicily, and it's easy to see why...