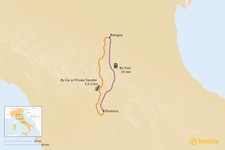 It can take a mere 35 minutes to get from Florence to Bologna making the 66-mile (106 km) trip between the two cities a popular itinerary item. For cities like these with restricted driving access for non-residents (ZTL zones) in the center and expensive tolls, especially those across Northern and Central Italy, the train is the best mode of transport; Bologna and Florence are no exception. Trenitalia's high-speed frecciarossa gets you to Bologna in under 40 minutes, an impressive feat considering the 67 miles covered.

The least convenient option to get from Florence to Bologna is by car or private transfer. Driving through miles of tunnels between hundreds of trucks, the trip is dark, boring and best-avoided or replaced with the backroads at the expense of a quicker trip.

For many, the best part of making this trip is crossing between two popular food regions—Tuscany and Emilia Romagna—in such a short timeframe. Make the most of the area's legendary cuisine with a 7-day food and wine tour, including vineyard visits, a day trip to Parma, and a pizza-making class.

This is the most convenient way to get from Florence to Bologna. Both Trenitalia, Italy's national train operator, and Italo, a private alternative, serve this route frequently throughout the day. Take the train at the busy Firenze Santa Maria Novella, arriving at Bologna's grandiose and newly-developed Bologna Centrale.

The ticket between the two cities can be less than $20, but advance booking is suggested as high-speed ticket prices fluctuate in a similar way to flight rates. With the high-speed train option, there are no stops between the two cities and the trip is exactly 35 minutes. However, the ride is not a particularly attractive one as it includes over 15 miles of dark tunnels through the Apennine Mountains.

If you don't mind a slower trip, you can choose to take Trenitalia's slower and slightly more affordable regionale option (1.5 hours), transferring in the city of Prato.

This is the least convenient way to get from Florence to Bologna. Taking the A1/E35, the drive is smooth and safe. In Italian, it's referred to as the direttissima option for its speed in getting you from A to B—though expect heavy-duty vehicles to slow down the drive as well as frequent roadwork.

In terms of landscape, the route is surrounded by either long, seemingly never-ending tunnels underneath Apennine mountains or scenery of plain, deserted woodlands which may not be your ideal perception of Tuscany. If you choose to drive, avoid making the trip around rush hour, as many commute across the area. On the A1, take the Casalecchio di Reno exit to enter Bologna.

Parking within Bologna's city center is notoriously difficult; it may take you up to an hour or two to find a spot that is a long walk away from your destination. It is recommended to return the rental once you arrive, or park it outside the city center and then switch to taxis or TPER, Bologna's local bus system, to get around. Read more on navigating inside the city in this Ultimate Guide to Bologna.