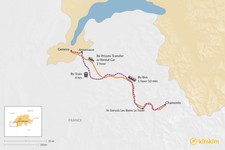 Geneva the bustling city in the French-speaking area of Switzerland is a short distance to Chamonix, France. Chamonix is a commune in the Haute-Savoie area in the Auvergne-Rhône-Alpes region in southeastern France. It is a well-known ski area as it sits among Mont Blanc, Aiguilles Rouges, and Aiguille du Midi.

The proximity of Chamonix to Italy and Switzerland makes it a special spot in France, with tinges of Italian and Swiss cultures. Chamonix is only 54 miles (88 km) away from Geneva, even though it's over the Swiss border. There are numerous ways to get from one region to another including a train or a bus that might take a little longer than driving but takes away the stress of alpine driving.

This 7-day itinerary around Mont Blanc is a great resource for adventurers and sight-seekers. For foodies, this 10-day itinerary takes you to Lyon, Annecy, and Chamonix, and includes wine tastings and tours and many gastronomical experiences.

A scenic drive will take a little over an hour. There are many rental agencies to choose from in Geneva but it's best to check that crossing country borders is allowed. Another option is to hire a car which will allow for the chance to take in the sights while avoiding the stress of driving in a foreign country—especially one known for hairpin turns along mountain passes.

Follow A40 and N205 to Route Blanche/D1506 in Chamonix-Mont-Blanc. You may want to stop halfway in Cluses, which is a quaint commune on the Arve river.

Another option is to take the bus which will take a little over an hour. There are many service providers that operate numerous times a day. Catch the bus from the Cornavin train station or the Gare Routiere (Geneva Coach Station) which is in the center of town. Make sure to buy your tickets beforehand and bring your passport along!

Taking a train will get you there in around 4 hours but there are 2 transfers—one at Annemasse and another at St Gervais Les Bains Le Fayet.

Plan your trip to Switzerland

Plan your trip to Switzerland

How to Get from Geneva to Annecy

Geneva, the bustling international hub in the French-speaking area of...

Circle the highest summit in Western Europe in just seven days of...

Traverse over high mountain passes and through small alpine villages on...

Traverse alpine passes, feast on local cheese, and breathe in the crisp...

Follow this famous alpine route on a 12-day traverse past glacial peaks....

If you're dreaming of hitting the open road but are short on time, this...

A
Arvind R.
Canada
"Olivier and Julien were great. They were responsive and informative. Awesome trip!" read more
Traveled to Switzerland as a couple in July, 2019

Oliver L.
Colorado, United States
"We set up a custom, unique experience with KimKim. We wanted a self-guided tour to align with our dates. KimKim worked with us to find an amazing trip to hel..." read more
Traveled to Switzerland as a group in September, 2018
Create your custom-made trip to Switzerland
Get Started