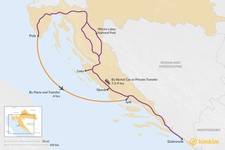 There are a couple of ways to travel the 441 miles (710 km) between Istria, Croatia's northernmost peninsula, and Dubrovnik.

Though it is possible to drive, travel by plane is by far the most efficient way to connect. Renting a car or going by private transfer is, however, a great option for those who wish to make stops along the way to see other sights or towns such as Plitvice Lakes National Park, Rijeka, Zagreb, or Zadar.

For trip ideas, consider this 12-day itinerary covering the coast from Istria to Dubrovnik or pack in some adventure by hiking and kayaking through Dalmatia.

There are a number of major car rental companies in Pula that offer manual and automatic vehicles (though automatic cars are more expensive to rent). Gas in Croatia is bought by the liter and tends to be expensive as it requires four liters per gallon.

Depending on the route, traffic conditions, and tolls, the trip from Istria to Dubrovnik can take as little as seven and a half hours. There are two options from which to choose: a highway route through central Croatia and along the coast or a second inland route to make a stop at Plitvice Lakes.

The first highway route along E71 is the fastest at seven and a half hours without traffic or excessive stops. If choosing this option that skims the coast near Istria and Dubrovnik, consider stopping in Rijeka for an initial coffee break and later in Zadar or Šibenik. Have kuna (local currency) on hand for the toll fares for each direction both to and from Split.

The inland route toward Plitvice Lakes runs along E71 as well until it veers to the left to take highways 42 and 1 to reach the lakes. This route, as well as the time spent inside the park, will add at least two hours to the overall travel time.

For a more relaxed road trip through the country, plan to stop and spend the night in Rijeka, Zagreb or Zadar.

Croatia Airlines services a daily flight between Pula on the Istrian peninsula and Split. The flight is direct and relatively inexpensive, making this an option for those hoping to make a quick transfer.

From Split, it is a three-hour drive to Dubrovnik, which affords travelers the opportunity to see more of the coastline and islands. Take a ferry connection to see Hvar, Mljet, Milna and Korčula en route to Dubrovnik.

Kay M.
Wisconsin, United States
"Antonia, we so appreciated your diligence and care in both planning and executing our incredible Croatian Adventure. All of our lodging, transports and activ..." read more
Traveled to Croatia as a couple in September, 2019
Plan your trip to Croatia
Customize your trip with help from a local travel specialist
Plan Your Trip