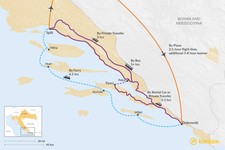 There are a number of ways to travel the 143 miles (230 kilometers) between two of Croatia's most popular coastal destinations, Dubrovnik and Split. While train travel along the coast has completely disappeared since the end of Yugoslavia, there are plenty of other options to traverse the craggy coast stretching hundreds of miles and dotted with more than 1,200 islands.

Choose to travel by catamaran ferry for a hands-off and relatively inexpensive mode of transportation that provides scenic views and stops at a few islands along the way. Renting a car or going by private transfer is easy and efficient, as long as traffic and border crossings in Bosnia and Herzegovina are not congested. An added bonus of private transfers: a short commute time.

Bus travel is a less comfortable, but inexpensive option. There are flights available between Dubrovnik and Split, though they are more expensive than "slower" travel methods and don't actually save much time—many flights require a 3-8 hour layover.

For trip ideas, consider this 8-day itinerary from Split to Dubrovnik, or this 12-day self-drive tour of Croatia.

Krilo catamarans between Dubrovnik and Split run from May to October, peak tourism months. The fast boat is reasonably priced and among the most efficient methods of reaching Split while stopping at four other ports along the way including Korčula, Hvar, Milna, and Miljet. There are six daily departures from Dubrovnik, though the earliest departure is in the afternoon after the first boat from Split arrives.

Jardolinija also operates a ferry, though it requires an extra hour and a half travel time. There is only one daily departure setting sail in the morning from Dubrovnik.

There are a number of major car rental companies in Dubrovnik that offer manual and automatic vehicles (though automatic cars are more expensive to rent). Keep in mind that gas in Croatia is bought by the liter, and tends to be expensive.

Depending on the route, traffic conditions, tolls, and border control lines, the trip from Dubrovnik to Split can take as little as three hours. There are a few options from which to choose: a highway route through Bosnia and Herzegovina, a classic and scenic coastal route, and an island-hopping ferry route.

The highway route along A1 is the fastest at three hours without traffic or long waits are the two border crossings through Bosnia. Have kuna (local currency) on hand for the toll fare for each direction both to and from Split. The coastal route along E65 and D8 resorts to small, scenic highways with slower speed limits and two border crossings through Bosnia as well, taking four to five hours.

To avoid the border crossings, take D8 up the coast and onto 414 to catch a ferry to cross from Trpanj to Polce before continuing up highway D8 along the coast. This trip will also take four to five hours, but both slower options are rewarded with stunning views of the Adriatic.

For those who prefer not to rent a car, private transfers can be booked between Dubrovnik and Split. Selecting a private transfer provides more comfort than the bus and more control over your schedule. You can book this as part of a broader tour itinerary, and having a local driver is great for getting additional insights at sights and stops along the way.

Travel by bus is among the least expensive options with the most frequent departures, generally every half hour nearly any time of day. The travel time between Dubrovnik and Split is optimistically five hours, though dense traffic during peak tourism season and long lines at the border with Bosnia and Herzegovina can lengthen travel time.

If scheduling tours on the same day of travel, arrive with plenty of time, at least two to three hours, before the start of the tour. Companies such as Flexibus or Arriva provide a more comfortable trip with buses outfitted with wifi, charging outlets, and a toilet. Expect at least one break during the drive and a minimal fee per suitcase.

While there are flights with Croatia Airlines between Dubrovnik and Split, most include a lengthy stopover of multiple hours. The only private plane transfer currently running only flies from Split to Dubrovnik.

Though there are several travel options between Zagreb and Split, the...

Plitvice Lakes National Park is 150 miles (240 km) away from Split and...
Getting Around Croatia