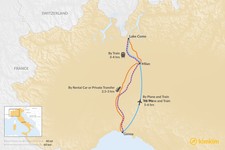 The Italian Riviera is approximately 137 miles (220 km) from the Lakes District, making travel via rental car or private driver the quickest way to get between the two cities. Traveling by rail would be the second-fastest option, with several daily trains running between the city of Genoa, which is located in Liguria, Italy and part of the Italian Riviera, and Milan, which is the closest major city to the Lakes District. From Milan, the train to Lake Como, one of the most popular lakes in northern Italy, is a quick 35-minute journey.

The slowest route between the two regions would be a combination of flying to Milan and then traveling via train. There are flights between Genoa and Milan, but the majority require a transfer in Rome, which puts flying time at close to four hours. From Milan, you can take the train to Lake Como.

In addition to its stunning and varied natural coastline, the Italian Riviera has a wealth of cultural history. This guide showcases the Five Villages of Cinque Terre, where you can get a real feel for Italy’s ancient past. While visiting the Lakes District, consider this 9-day tour of Milan and the Lakes region, which incorporates visits to several of Milan’s best hotspots as well as exploring Lake Como.

The fastest and most direct way to get from the Italian Riviera to The Lakes District is by car. From the city of Genoa, you will access the A7 from SS1 and then take SS340 to Viale Benedetto Castelli. The route will take you through Milan, which is a great stopping point for lunch or to see a few of the sights there. Milan is home to the gothic cathedral, Duomo di Milano, and Sforzesco Castle, which was built in the 15th century and has daily tours available.

While traveling via train isn’t quite as fast as driving, it is an easy and low-stress way to get from one area to the other. There are daily nonstop trains from Genoa to Milan, with connections in Milan to Lake Como’s Como San Giovanni rail station. Travel time takes from three to four hours, depending on the train you choose and transfer time between stations. Tickets can be purchased online or at the station, but as the route between Genoa and Milan tends to be a popular one, purchasing tickets in advance is recommended.

Going by plane and train is the slowest and least convenient mode of travel between the two regions. The closest airport to the Lakes District is Milan, and the flights between Genoa, which is home to the main airport for the Italian Riviera, and Milan all connect through Rome. Flying time takes between 3.5 and 4 hours, depending on layovers. Once you land in Milan, you’ll take the Malpensa Express rail service to Milan’s main rail station, which takes about an hour, and from there it is a 35-minute train ride to Lake Como.