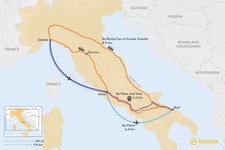 The Italian Riviera region is approximately 570 miles (917 km) from the heart of Puglia. Traveling between the two regions is most easily accomplished via commercial air travel. You can also combine flying and taking the train, or rent/hire a car and drive.

Flying from Genoa, one of the main cities in the Italian Riviera, to Puglia’s capital city of Bari is the quickest way to get from one region to the other. With a change of planes in Rome (there are no nonstop flights between the two cities), travel time is three to four hours.

Another option is flying nonstop from Genoa to Rome, and then taking a train to Bari. From Rome, the trains run daily and take about four hours, for a total of five to six hours of travel time, including flight time and transfers.

Driving from the Italian Riviera to Puglia is the third option, and while the drive is long at about nine hours, choosing this route does offer the added bonus of being able to stop along the way and visit some of Italy’s other cities.

This 13-day tour covers some of the highlights of the region, including the coastal area of Cinque Terre and the village of Portofino. Once in Puglia, consider this 10-day itinerary to explore not only the amazing beaches, but historic sites such as the trullo Church of St. Anthony and the Piazza del Duomo.

There are several flights a day from Genoa to Rome and flying time is just over an hour. From Rome, you’ll be able to connect to Bari, which is also about an hour flight. Layover times can be anywhere from one to two hours, depending on the airline and what days you choose to travel.

After the quick, one-hour flight from Genoa to Rome, you can catch a train to Bari directly from Roma Termini Station. You’ll need to take the Leonardo Express Airport train to Termini station, which takes 30 minutes. The express train runs about every 15 minutes, making it very convenient.

Direct trains from Rome to Bari take about four hours, and can be booked online or at the train station. Keep in mind that while there are several slower trains with multiple stops that go from Rome to Bari, there are only a few high-speed trains per day, so it may be advantageous to purchase train tickets in advance.

If you choose to drive from the Italian Riviera to Puglia, the fastest route would be to travel from Genoa on the A12 and then connect to the A16 and A14 to the Viale Giuseppe Tatarella. If you choose this route, you’ll pass through the renowned Renaissance city of Florence, an excellent place to spend a couple of nights (or just stop for lunch and some sightseeing).

Another option would be from Genoa on the A7 to the E45, which takes you along the Adriatic Coast. Consider a stop in Bologna, which is about three hours from Genoa. The Piazza Maggiore in Bologna is banked by many medieval and renaissance buildings, as well as plenty of cafes to take a break from the long drive.