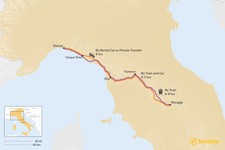 The Italian Riviera is located approximately 256 miles (413 km) from Umbria. Driving time between the two regions is approximately four hours, making traveling via car the quickest way to get from one place to the other. The second fastest route would be a combination of driving and train travel. The drive from the city of Genoa, which is located in Liguria, Italy and part of the Italian Riviera, to Florence, is about three hours. From Florence, there are several daily train departures to Umbria’s capital city of Perugia.

Traveling exclusively by train is the slowest option, as the majority of the trains from Genoa to Perugia make several stops along the way and usually involve a change of trains. There are daily departures between the two cities, and travel time is between six and eight hours, depending on the route you choose.

This guide to Umbria will help you make the most of your visit there, with ideas on when to go, where to go and sightseeing ideas such as chocolate tasting or visiting the medieval town of Orvieto. And during your time in the Italian Riviera, this 9-day tour includes wine-tasting in Cinque Terre and a boat tour in Portofino.

Driving is the fastest way to get from the Italian Riviera to Umbria. You can rent a car or hire a driver, and depending on traffic, the trip takes about four hours. From Genoa, you’ll take the A12/E80 and eventually connect to the A1 which takes you to Perugia. The drive takes you near the city of Pisa, a great place to stop for a bit and check out the famous leaning tower.

By Train and Car

From Genoa, you can rent a car or hire a driver to make the drive to Florence, which takes about three hours. You will travel via the A12/E80, connecting to the Viale Etruria.  In Florence, you’ll catch a train from Santa Maria Novella station, Florence’s main rail hub, and travel to Perugia. Tickets can be purchased online or at the station, and the travel time is about two hours, depending on the train you choose.

Consider spending some time in Florence before you embark on the next leg of your journey. Florence, the capital of Tuscany, is home to the famed Duomo, as well as the Uffizi Gallery, where you can see exhibits of Botticelli’s “The Birth of Venus” and da Vinci’s “Annunciation.”

While traveling via train from The Italian Riviera to Umbria is the slowest option, it’s also a relaxing way to get from one region to the other. From Genoa’s Genova Principe rail station, you can take one of several daily trains to Perugia. Average travel time is about six hours, with some trains taking longer and most requiring transfers along the way.

Train services include dining cars or carts that offer snacks and drinks, and some trains have bar cars that offer light snacks for the duration of the trip. Savvy train travelers often purchase a to-go lunch from the station or nearby restaurants prior to embarking, as food services onboard can be somewhat limited.