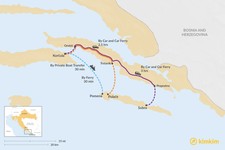 There are a number of ferry routes to travel the 40 miles (65 km) between two of Croatia's most popular islands, Korčula and Mljet. Whether you have a car or not, there are two ferry options for traveling between the two islands. Remember, however, that direct travel between Korčula and Mljet is only possible during peak travel months, or mid-April to October.

Travel by ferry is hands-off and a relatively inexpensive mode of transportation that provides scenic views. During the off-season or to transfer a car from Korčula to Mljet, the route also includes a stop at the mainland peninsula that is connected to Ston, another popular coastal city.

For trip ideas, consider this 8-day itinerary that explores the best of Dalmatia, or this daylong cycling and wine tour of Korčula.

The most convenient and efficient option to travel by private transfer can also be highly personalized. Travelers can book a simple transfer with or without a return ride for a day trip. Alternatively, highering a private boat transfer also provides the opportunity to do some island or beach hopping with a local guide who can provide further insight.

Kapetan Luka and Krilo ferries run between Korčula and Mljet run from mid-April to October, peak tourism months. The fast boat is reasonably priced and among the most efficient methods of reaching Mljet in just half an hour. There is, however, only one daily departure. This option is also only suited to foot passengers. Travelers that wish to take a car to Mljet too must take the longer, indirect route, which is also the only route during the off-season.

Jardolinija also operates a ferry, though it requires an extra hour and a half travel time. This route operates year-round with four or five daily departures contingent on the season. This is the route to take if a car must be transferred as well. In this case, take the ferry from Korčula to Orebić then drive to Trstanik. From Trstanik, take the ferry to Polače. The entire journey requires roughly two and a half hours

If visiting Ston as well, it is possible to drive from Orbeić to Ston. From Ston, there is a closer ferry terminal in Prapratno which transfers to the city of Sobra on Mljet. This route requires roughly three hours, but allows for more leisurely travel with time on the mainland for additional sightseeing.

Mljet is a popular island with visitors to Croatia and easy to get to...
Getting Around Croatia

Korcula is known for its white wine. Grk wine is a white wine grape...

This route is ideal for those who are short on time but looking to fit...

A combination of diverse cultural exploration and active adventure, this...

Tessa G.
Delaware, United States
"Robi helped plan our 15 day honeymoon in Croatia. He really is the package deal. His great personality, genuine nature, and knowledge of the area is more tha..." read more
Traveled to Croatia as a couple in October, 2021
P
Paul B.
Florida, United States
"WOW,my fiancée and I just had the best vacation ever. This was the first time I used a travel planner and I’ll never do it another way. We recently were in..." read more
Traveled to Croatia as a couple in August, 2021
Plan your trip to Croatia
Customize your trip with help from a local travel specialist
Plan Your Trip