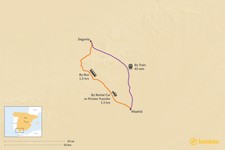 Segovia is just 60 miles (96 km) north of Madrid, making it a great day trip from Spain’s capital city. The fastest and most convenient way to travel between the two is by train, which takes just 30 minutes to reach the Segovia-Guiomar station. Keep in mind that this station is outside the city, so a 15-minute bus takes you into the old town near the Aqueduct of Segovia.

You can also go by car, either rental or private transfer. The drive takes just under 1.5 hours and passes by the scenic Guadarrama Mountains. Likewise, the Spanish bus company Avanza offers frequent departures from Madrid. The route is similar to driving and also takes about 1.5 hours.

The train is the fastest way to travel between Madrid and Segovia. Trains depart every 40-60 minutes from the city’s Charmartin station, which is located in the northern part of Madrid. In about 30 minutes, you’ll reach the Segovia-Guiomar station, which is better known as Segovia Av. Once you leave the train, you’ll find a bus waiting to take you to the old town. The bus isn’t complimentary, so make sure you have some cash on you for the modest fare. In just about 15 minutes, you’ll arrive at the entrance of the city’s old town, near the famous Aqueduct.

You can also make the trip by car, either rental or private transfer. Madrid and Segovia are well-connected by major highways, so the drive is fairly straightforward. You’ll leave Madrid from the north following highway A-6. At Collado Villalba, there are two excellent stopping points. To the west is San Lorenzo de El Escorial—a Renaissance-era royal monastery—and to the east is the rural town of Manzanares del Real—set in the Cuenta Alta Manzanares Regional Park with a 15th-century castle. Both are just 20 minutes from the highway.

Eventually, you’ll take the AP-61 highway north all the way to Segovia. This stretch of the trip is quite scenic, with views of the Guadarrama Mountains to the east.

The bus takes the same route as driving, sticking to the major highways and heading north. Direct buses are operated by the company Avanza, departing frequently from Madrid’s Moncloa station. They arrive in Segovia’s Estacio station in about 1.5 hours. Grab a seat on the right side of the bus for scenic mountain views after you leave the city of Madrid.

In just one week, you can enjoy the perfect family holiday in Spain by...