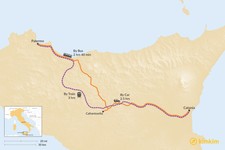 The cities of Palermo and Catania, both located in Sicily, are approximately 131 miles (212 km) apart. Palermo, Sicily’s largest city, is on the northwest side of the island, by the Gulf of Palermo, while Catania is on the eastern side, on the coast of the Ionian Sea.

The quickest way to get from Palermo to Catania would be via rental car or private transfer, which takes about 2.5 hours. The drive takes you from one coast to the other, through the heart of Sicily and near several towns worth visiting.

The second fastest way between the two cities would be by bus, which takes about 2 hours and 40 minutes. Bus service tends to be one of the most commonly used forms of transportation on the island, and is generally reliable and comfortable.

Train service is also an option, with nonstop service taking about three hours. Palermo Centrale rail station has several departures a day to Catania, the majority of which are nonstop.

During your time in Palermo, consider this 5-day tour that takes you around the city and to surrounding areas, with culinary exploration of the Palermo street food scene as well as day trips to nearby Segesta and Erice. And this 3-day tour provides options for visiting both coasts, whether you want to walk the city streets of Catania and visit the archaeological sites in Taormina, or see more of what Palermo has to offer on the opposite coast.

From Palermo, you’ll take the E90, connecting to the A19 which takes you into Catania. The drive will take you through several other towns along the way, including Campofelice di Rocella, which is about an hour from Palermo and has sights such as the Temple of Victory and the natural wonders of the Pineta di Grotta Grattara. You can also stop in at Caltanissetta, which will take you slightly off the driving route but has some amazing historical sites. Visit the Santa Maria La Nova cathedral and stroll around Piazza Garbaldi, where you can enjoy a meal or just relax before continuing the journey to Catania.

Bus service in Sicily is the most common way to get from one city to another. Buses run regularly between Palermo and Catania, and the buses are usually comfortable and clean. The main bus terminal is located by the Palermo Centrale train station and tickets can be purchased at the terminal either on the day of departure or in advance.

Palermo Centrale rail station is located in the center of the city, in Julius Caesar Square. There are several daily nonstop trains between Palermo and Catania Centrale station. Tickets can be purchased online or onsite, and it is recommended that you purchase your tickets in advance as the trains do fill up. There is usually some kind of food service available on board, but it is limited and expensive so most travelers prefer to purchase their own snacks to bring on the trip.