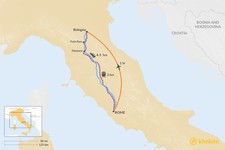 Rome and Bologna are both on Italy's high-speed train network, making train travel between the two the most convenient and quickest mode of transportation. Those with more time to spend may choose to drive this route and detour into the Tuscan rolling hills along the way.

If you choose to drive from Rome to Bologna, it's best to rent a car once you are on your way out, due to the city's strict ZTL areas (Restricted Driving Zones). The same applies to Bologna; much of its city center is off-limits for non-resident drivers so you may want to drop the car at your arrival. More tips can be found in this Ultimate Guide to Bologna.

The least convenient option is flying from Rome to Bologna, as you would need to factor in additional shuttle time to the distant airports as well as time spent passing through security in Rome's busy Fiumicino Airport. With the exception of flying, all options include a possible (and worthwhile) stop in Florence.

This is the quickest and the most convenient way to get from Rome to Bologna and from one historical city center to the next. You can either take the high-speed train from Rome's Tiburtini or Termini station and have two train operator options to select from: Trenitalia and Italo. Both options get you to Bologna with no need for transfers. This is a busy route and tickets are priced similarly to flight tickets, so the earlier you book, the better.

At just two hours, the train ride is quick and all high-speed options are comfortable (and air-conditioned during the summers). In case you need a little break, most routes happen to include the Cradle of the Italian Renaissance (in other words, Florence) on the way in which case you can choose to split your trip.


By Rental Car or Private Transfer

At about 240 miles, the drive between Rome and Bologna is a long ride. Expect to pass through frequent speed cameras and to incur high tolls. You may also come across construction and deviations along the way, which are frequent on the A1/E35.

Still, the drive is rather exciting for those with more time to spend as you get the chance to pass through four varied regions, initially departing from Rome's Lazio, passing through Umbria and Tuscany, ultimately parking in Bologna's Emilia Romagna. For bikers looking for an adrenaline rush, you can choose to factor in the famed and picturesque Futa Pass.

For a snack stop, take the Firenze Sud exit into Florence where you can grab a truffle panini, fresh-pressed Tuscan olive oil, and handmade chocolate focaccia (see more in this food and wine itinerary in Bologna, Florence, and Rome). Expect traffic when entering and exiting Florence. Another stop with minimal detour is the Tuscan city of Arezzo. For this, you need to take the Arezzo exit off of the A1/E35.

Once you make it to your destination, Bologna is best-experienced without a car as most of the center is inaccessible due to the limited driving areas. You may be surprised to receive fines months later for accidentally steering into a wrong road. More so, parking is notoriously difficult in the city center. The best drop-off location for most major rental companies is the Guglielmo Marconi Airport or the Bologna train station, from where you can take a taxi or a local TPER bus into the center.

Unless you're transferring from an international flight, flying is the least convenient way to get from Rome to Bologna considering the distance between both city centers to the Fiumicino Airport and the Guglielmo Marconi Airport. Needless to say, the trip becomes even more difficult when traveling with heavy luggage.

In Rome, take a taxi (30-40 minutes from city center) or Trenitalia's Leonardo Express from the Termini station (30 minutes) to the Fiumicino Airport. Although Rome's airport is a major hub and is likely to be busy all year round, Bologna's is relatively small and your arrival should be a quick process given that there is no major fair ongoing when you get there (which is likely given an active trade calendar).

Once you land in Bologna, follow the signs to take a taxi from the pick-up point (15 minutes to city center) or the Aerobus shuttle to your selected destination on its route (up to 20 minutes).