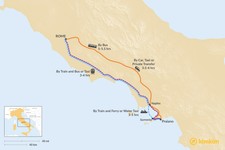 Rome and Praiano on the Amalfi Coast are just 170 miles apart, but it takes anywhere from three to five hours to travel between them. Roads are steep and winding. Trains can take you only to Sorrento or Salerno. From there, you must travel by car, taxi, bus, or private transfer to Praiano.

During the summer months, water taxis and ferries offer service to nearby Amalfi and Positano; Praiano is just a short taxi ride away. Bus service is available year-round. Air travel is not a good option; the closest airport is in Naples. It is easier and cheaper to use ground transportation, and the views along the way are magnificent.

By Car, Taxi, or Private Transfer

Driving from Rome to Praiano is a straightforward process, although you must contend with traffic and steep terrain. There are plenty of places to stop along the way, including Ercolano (Herculaneum), Vesuvio (Mount Vesuvius), and Pompei (Pompeii).

Rome has a Zona a Traffico Limitato (ZTL), an area where you cannot drive unless you have a permit. Watch for ZTL signs as you leave the city. From Rome, take the A24/E80 toll highway to the A1/E45. Head south toward Napoli (Naples).

In Naples, take the A3/E45 (toll) south past Ercolano and Pompei. Exit at Castellammare di Stabia and turn left onto Strada Statale 145 (SS145). Follow SS145 through Meta (there are several turns to watch for). This road dead-ends into Via Meta-Amalfi/SS163. Turn right and stay on SS163 until you reach Praiano.

By Train and Bus or Taxi

Praiano does not have a train station, but it is relatively easy to get from Rome to Via Nocera or Sorrento via train and take a bus or taxi from there to Praiano. If possible, choose travel dates that fall during tourist season (mid-March through October) so you can take the air-conditioned Campania Express train rather than the hot, crowded EAV/Circumvesuviana commuter train.

Trains run many times per day between Rome's Termini Station and Napoli Centrale station in Naples. Exit the train and head downstairs (there's no elevator) to the Piazza Garibaldi station, where you will board either the EAV/Circumvesuviana train or the Campania Express. (Tip: Although you can buy Campania Express tickets and reserve seats for that train online, you must buy EAV/Circumvesuviana tickets at EAV ticket counters.)

If you travel by Campania Express, continue to Sorrento. From there, take a SITA Sud bus or taxi to Praiano. If, instead, you travel on an EAV/Circumvesuviana train, leave the train at the Via Nocera station and take a taxi from Castellammare di Stabia to Praiano.

By Train and Ferry or Water Taxi

Along the Amalfi Coast, ferries and water taxis operate from April through November. Ferries are a good alternative to buses during tourist season. For maximum time on the water, travel from Rome to Naples by train. Take a taxi to the Molo Beverello ferry port – be sure to ask for the fixed fare – or take the #1 tram to the port. Alilauro ferries connect Naples and Sorrento; choose a morning departure time so you can transfer to a Sorrento-Positano or Sorrento-Amalfi ferry. Both Positano and Amalfi have regular SITA Sud bus service to Praiano, or you can take a taxi.

Another option is to travel by train from Rome to Salerno, then head to the ferry terminal at Piazza della Concordia, which is a short walk from the train station. Travelmar offers service to Positano several times daily. From there, Praiano is best reached by taxi, although SITA Sud buses do connect the two towns.

You can also take a train from Rome to Naples's Napoli Centrale train station, head downstairs to the Piazza Garibaldi station, and take an EAV/Circumvesuviana train or the Campania Express to Sorrento, as described above. Next, take an Alilauro ferry to Amalfi or Positano and transfer to Praiano by taxi or SITA Sud bus.

The easiest way to get from Rome to Praiano by bus is to take a Marozzi bus. Buses travel once daily between Rome's Autostazione Tiburtina, which is across the street from Roma Tiburtina train station, and Praiano via Sorrento. Expect the trip to take about five hours.