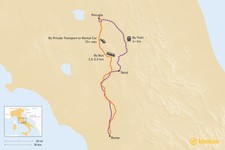 Barely 50 miles (80 km) separate Rome from the southern border of Umbria, making the region easily accessible from the Italian capital. The largest city of Perugia lies 82 miles (133 km) to the north of Rome, with the forests and valleys between dotted with famed medieval hill towns.

Travel by train is the quickest and easiest way to make the journey, with direct routes leaving Rome’s Termini station and reaching Terni in the south in under an hour, and Perugia in under three hours total.

Private transport is a good option for those looking to enjoy the scenery of Lazio and Umbria in comfort, avoiding the hassles of parking and navigating. Renting a car and driving takes just over an hour to three hours depending on destination, and allows for the greatest flexibility in terms of sightseeing. Driving in Rome can be a daunting experience, so it’s often easier to take the train and pick up a car in Umbria.

The bus is always the cheapest but also the slowest form of transport, with some limited routes between the hill towns. Find more recommendations on what to see, where to stay, and what to eat with our Ultimate Guide to Umbria.

Trenitalia’s Regionale line is the most convenient way to get from Rome to Umbria, with multiple daily departures, and minimal stops. Trains leave from Rome’s central Termini station and reach the region’s southern city of Terni in just over an hour, Spoleto or Orvieto in 90 minutes, Assisi in two hours, and Umbria's northern capital of Perugia in 2.5 hours.

Some smaller towns like Gubbio, Todi, and Citta di Castello aren't served by Trenitalia and require connections to local private trains, so make sure to read timetables closely, and consider renting a car if you plan on visiting more remote locations.

Train stations in Umbrian towns are generally located outside the city walls, so plan to use a funicular, bus, or shuttle to reach the center. Regionale trains don’t require reservations, and tickets can be purchased at the station. Onboard there’s air-conditioning and (sometimes patchy) wifi, but no food or refreshments.

By Private Transport or Rental Car

Private transport offers the most comfort and ease on the journey, as well as the option to customize pick-up and drop-off points. Options range from basic shuttle services to guided tours, and a range of vehicles from premium chauffeured cars to larger vans and buses for groups.

Travel via rental car is a good choice for those looking to spend more time exploring the region and venturing deeper into the hill towns. Traffic in Rome can be stressful, so first-time drivers should consider taking the train to a base in Umbria and renting a car there. Those who prefer to drive from Rome have the option of picking up their car from Fiumicino (FCO) airport. This adds on a bit of travel time but allows drivers to reach the highway quickly and avoid congested inner-city driving and restricted ZTL zones.

From the airport, head to the A1/E35 for the fastest, most direct route towards Umbria. Roads are generally well-maintained and well-marked, with newer highways serving the larger towns. Perugia is two hours north, with most of the popular hill towns between taking 1.5 to 2.5-hour drive. Like the train stations, public parking in Umbria is often at the foot of the hill towns, a short ride from the old town via bus, funicular, or escalator.

While taking the bus is the cheapest way to get from Rome to Umbria, it’s also usually the longest and least convenient. Flixbus and Sulga serve the city’s northeast Tiburtina station and Fiumicino (FCO) airport, with routes reaching Terni in just over 1.5 hours, and Perugia in 2.5 hours.

Bus travel between the smaller towns can be sparse and unreliable, often with no Sunday service, so the train is the preferred mode of transport where available. The exception to this rule is the journey from Rome to Perugia. While there are only a few direct trains that travel this route, a daily direct Sulga bus makes the trip in under two hours, every day except Sunday, and is a good alternative for reaching the region’s capital quickly.