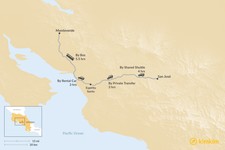 While the 83 miles (133 km) of Costa Rica that lay between San José and Monteverde may look short, the landscape makes the hilly, scenic trip between them at least 3 hours long. The best option for transportation is via car—by shuttle specifically. Allowing someone else to drive is the most popular and efficient way to get to the remote cloud forest area of Monteverde.

Buses are a low-budget option and will take at least 5 hours. The last 13 miles (20 km) heading into Monteverde are not paved, which can make for a bumpy, tedious, and even dangerous ride.

Flying isn't a viable option. There are no airports in Monteverde, and even if you flew to La Fortuna, you’d still have another 3 hours by car or taxi, which makes this option the least realistic.

While staying in Monteverde, consider exploring more of the country’s Pacific Coast with this 10-day itinerary or visit the best Costa Rica has to over on a 14-day trip.

The most recommended method of travel from San José and Monteverde is by shared shuttle. Most days two shuttles, one in the morning and one in the afternoon leave the city and arrive in Monteverde about 4 hours later. They follow the main roads and will take you west to Puntarenas and then wind northeast to Monteverde. Taking a shuttle will alleviate the stressors of toll roads and dangerous conditions on the last stretch into Monteverde.

A private transfer may be the most expensive option-besides, but it is one of the most popular. This route is one where having an experienced driver who is familiar with the area is well worth it. During the rainy season, the roads into Monteverde are almost impassible, and even a 4WD rental car and the confident driver won't be enough.

There is truly no way to make this trip without a 4WD rental vehicle. If one is not available, do not attempt this drive. There's no reason to attempt this drive during the rainy season, and never at dark. If you are set on driving, set out from the city on Transversal 24 and then wind your way up through Route 27, Avenue 4, and Route 606 to take you into Monteverde. There are some tolls on these roads, so be prepared for that.

After Route 606 is where the unpaved road gets tricky to impassable, depending on the conditions—which can change rapidly. As this is a relatively short drive, most people do this in one day. There are a few places near the Gulf of Nicoya to stop, including Espíritu Santo.

The trip by bus from San José to Monteverde takes about 5.5 hours, about half a day of travel. One early morning bus and one mid-afternoon bus are scheduled daily, with an additional bus that arrives in nearby Santa Elena, about 6.5 miles (10 km) away.

This self-guided road trip is ideal for those who love adventure. Visit...

This 10-day itinerary combines mountain adventures with a bit of a beach...

Nina M.
Washington, United States
"Our trip to Costa Rica was one of the best trips I've ever been on, and it's all thanks to the wonderful people at GWA. This is the first time we've let a to..." read more
Traveled to Costa Rica as a couple in December, 2021