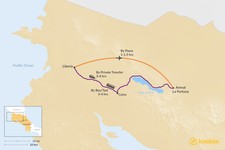 The fastest way to get from Liberia to Arenal/La Fortuna is a non-stop 40-minute domestic flight. Flights run daily and after a short hop, you'll land at the foothills around Costa Rica's most popular volcano.

By private transfer, the drive from Liberia to Arenal/La Fortuna can be done in two and a half hours. You can travel the 84 miles (135 km) either by taking Route 1 to 142 or the slightly longer Corredor Nortatlantico (Route 4). The first option allows for a scenic pass around Lake Arenal while the other brings you alongside Tenorio Volcano National Park.

There is public transport between the two cities but nothing runs completely direct. To avoid longer travel time and multiple transfers, it's best to take a combination of bus and taxi instead.

The Daniel Oduber Quiros International Airport is a busy airport that services a variety of airlines. The flight to La Fortuna operates once a day, every day of the week. Be sure to check the carrier's website for the most accurate information as schedules may vary during the off-season. Once you land in Arenal/La Fortuna, it's a short bus or taxi ride into town.

Driving around Costa Rica is a great way to get the most out of your visit. Hiring a private car means you can take your time traveling and stop as you wish. The major roads are in good condition and allow for easy travel. Once you're off the beaten path, you'll be on country roads through farmland and rural towns. If you take the route along Lake Arenal, there are a number of places to grab a bite to eat while overlooking the water. Alternatively, take in another volcano, and waterfall, by exploring the jungle trails at the national park.

There are no non-stop bus routes going to Arenal/La Fortuna. Each line has a transfer point where you'll have to get out and switch to another bus. For the most timely and cost-effective option, it's best to do a bus/taxi combination. Get on a bus at the municipal bus station in Liberia and take the 45-minute drive to Canas. From Canas, take a taxi the rest of the way (about an hour and a half) onto La Fortuna.

Because there are no roads in Tortuguero, most travelers will need to...

How to Get from Liberia to Monteverde

Monteverde, which is a tiny mountain community as well as a vast region...
Getting Around Costa Rica

Fun for the whole family, this itinerary covers two of Costa Rica's most...

This road trip itinerary is a truly off-the-beaten-path nature...

Stephen B.
Rhode Island, United States
"The perfect honeymoon. My wife and I just recently arrived back from our amazing honeymoon in Costa Rica. We have never heard of KimKim before, and it wa..." read more
Traveled to Costa Rica as a couple in June, 2022

David G.
South Carolina, United States
"So many good and positive things to say about this excellent trip to Costa Rica. Working with Randall on our itinerary and all other planning details was ve..." read more
Traveled to Costa Rica as a couple in June, 2022

Amy W.
Texas, United States
"We just arrived back from an amazing vacation experience in Costa Rica. Yuliana planned the perfect trip for our family. We enjoyed the white-water rafting, ..." read more
Traveled to Costa Rica as a family in June, 2022
T
Todd K.
Arizona, United States
"My girlfriend and I work rather long days and by the time the night or weekends roll around, we don't want to be bothered with doing anything that requires e..." read more
Traveled to Costa Rica as a couple in May, 2022

Naomi D.
California, United States
"I'm glad we used KimKim! The site was interesting to use since it takes your interests, timeline and and budget and makes suggestions to get you started, bu..." read more
Traveled to Costa Rica as a group in May, 2022
Create your custom-made trip to Costa Rica
Get Started