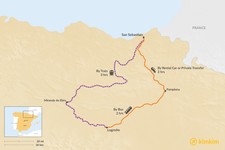 San Sebastian—Basque Country’s scenic coastal city—is 103 miles (165 km) from La Rioja, one of Northern Spain’s popular wine regions. The fastest and most convenient way to travel between the two is by car, either rental or private transfer. The drive takes just two hours to reach the region’s capital city and travel hub of Logroño. It’s quite a scenic route, passing near the Aralar mountain range and through the historic and lively city of Pamplona.

Although not as convenient, you can also make the trip by public transportation. Both buses and trains run between San Sebastian and Logroño. The private bus company La Estellesa is your best bet, offering routes in just over two hours. The train is the longest option and requires one connection in Miranda de Ebro, increasing your travel time to about three hours.

The fastest and most convenient way to travel between San Sebastian and La Rioja is either by rental car or private transfer. The two cities are separated by the mountains of the Aralar Range and the historic city of Pamplona, which is a great stopping point for lunch. You’ll leave San Sebastian from its south side, following highway A-15 along the Oria River and all the way to Pamplona—famous for its annual Running of the Bulls festival.

Although it’s a large, four-lane highway, you’ll still catch some scenery with glimpses of the valley and peaks of the Aralar Range. You’ll pass by a few rural, hilly towns worth a stop, including Leitza and Berastegi. There’s not a lot to do here, but you can grab a coffee and enjoy the small-town scenery. Once past Pamplona, you’ll switch to the A-12 highway. The scenic and historic towns of Estella and Puente la Reina are both worth the slight detour.

You can use Logroño as a hub or starting point for exploring the La Rioja region. Having your own car is the best way to explore, although local buses and tour companies do offer services. Some other towns worth a visit include Santo Domingo de la Calzada, San Vicente de la Sonsierra, and Ezcaray.

The bus takes a similar route as driving, following the same highways through the hills and Pamplona before reaching La Rioja. There are about three departures per day, arriving in Logroño in just over two hours. Regional buses tend to not serve this route, so the private company La Estellesa is your best option.

Trains are the longest and most restrictive option, departing San Sebastian and connecting in Miranda de Ebro. Although there are numerous daily departures leaving San Sebastian, there are only about three options for the second segment of the journey, from Miranda de Ebro to Logroño. Two of these options leave early in the morning, which doesn’t allow you enough time to make the connection. This means that your best option is to take one of the morning trains from San Sebastian and catch a 5:00 PM train to Logroño.

Located on opposite coasts of northern Spain, Barcelona and the Basque...
Getting Around Spain

In just a week you can embark on the road-trip of a lifetime from...

Spain is so much more than its famous cities. Over two weeks you'll see...

On this 15-day excursion through Spain, you'll take the road less...

Over 10 days you'll embark on a gourmet road trip from Madrid to Spain's...

Eight days is enough time to have the trip of a lifetime—particularly...

Nine days is enough time to immerse yourself in a couple areas of Spain,...

Eileen S.
Florida, United States
"Words can't express our gratitude and sheer joy we experienced using KimKim, but most important part was having Sam Lister aka our guardian angel tailormade ..." read more
Traveled to Spain as a couple in June, 2021

Jennifer S.
Texas, United States
"It was my first trip out of the US and my bf’s first time to Spain. Sam did an amazing job with all our bookings! He was excellent in picking the best hotels..." read more
Traveled to Spain as a couple in July, 2021

Wendy S.
Massachusetts, United States
"We had a wonderful trip to Spain. Ramon listened to our interests and created an outstanding itinerary! Ramon checked in with us daily, inquiring about our ..." read more
Traveled to Spain as a couple in January, 2020
Create your custom-made trip to Spain
Get Started