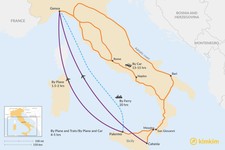 The island of Sicily is approximately 541 miles (870 km) from the Italian Riviera as the crow flies, or 820 miles (1,319 km) via car. While driving offers the bonus of being able to see more of Italy’s countryside, the easiest way to get from Sicily to the Italian Riviera is by commercial plane.

Driving would be the second-fastest option. Depending on traffic and route, it takes between 13-15 hours to drive. Any driving route requires taking a ferry from Sicily to the mainland, which adds about 30 minutes to the total trip, and some of the major highways do have tolls.

The slowest route from Sicily to the Italian Riviera would be by ferry. There is daily ferry service between Palermo and Genoa, and the trip takes about 20 hours. Ferries also depart from other cities in Sicily, but the Palermo to Genoa route is the most direct.

While trains in Italy are usually one of the most convenient ways to travel, the fact that Sicily is on an island makes it a bit more complicated. Trains from Sicily to the Italian Riviera can take nearly as long as the ferry, and would require a transfer in Rome. The train from Palermo to Rome also involves a ferry ride in which the train car is actually loaded onto the ferry. This is a fun and unusual way to travel, but if you’re looking for an expeditious route, it might be best to skip the train.

While in Sicily, consider this 8-day Best of Sicily tour, which explores the history, beaches and of course the amazing food. The Italian Riviera has much to offer, and this 14-day tour of Cinque Terre and surrounding regions covers nearly all the hotspots.

Sicily’s largest airport is the Catania-Fontanarossa, followed by Palermo Falcone-Borsellino. Both airports have multiple daily flights to the city of Genoa, which is located in Liguria, Italy and right in the middle of the Italian Riviera. The flight from Palermo is approximately 1.5 hours, while the flight from Catania is slightly longer at just under two hours. There are only a couple flights a day that are nonstop, but several daily flights connect through Rome. Layovers in Rome can add another hour or so to your total travel time.

The drive from Sicily to the Italian Riviera will take anywhere from 13-15 hours, depending on the route you choose. The shortest route takes you from Catania via highways E45 and A1, with a 30-minute ferry ride from Villa San Giovanni – Messina to the mainland. You’ll wind your way up past Naples and Rome, ending at Genoa.

For an alternate, albeit longer route, you can drive from Catania on A18, again taking the ferry at Villa San Giovanni-Messina, then take E45, A14 and A12 along the Adriatic coast. You’ll be able to explore some of Italy’s seaside towns, and this can be a great way to see the countryside if you aren’t in a hurry.

Regardless of the driving route you choose, an overnight stay along the way makes for a more relaxing trip, and gives you more opportunity to see different parts of Italy. If you drive via the E45 and A1, consider stopping in Naples for one night. Naples is about 7 hours from Catania, and has historic sites such as The Royal Palace and Ovo Castle. If you choose to drive along the Adriatic coast, the city of Bari, capital of Puglia and home to the Basilica San Nicola, is approximately 6.5 hours drive from Catania and a good mid-point place to stop for the night.

Operated by Grandi Navi Veloci ferry service, there are several ferry crossings each week between Sicily and Genoa. Taking the ferry is by far the longest route to the Italian Riviera, but if you enjoy a day at sea, it can be a fun alternative to driving or flying. Grandi Navi Veloci is the only ferry service between Palermo and Genoa, although there are other ferry options from Palermo to other nearby cities, as well as out of Catania. The ferry offers both cabins and reserved seating, and most have restaurants and other amenities onboard.