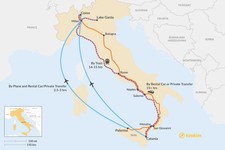 Sicily is approximately 900 miles (1,451 km) from the Lakes District, which includes lakes Maggiore, Como, Lugano, Iseo, and Garda. The quickest way to get from one region to the other would be a combination of flying to Milan, which is the closest major airport to the Lakes District, and driving. Other options include taking the train, or driving directly from Sicily.

Sicily’s main cities of Catania and Palermo both have daily nonstop flights to Milan, which is about an hour drive from Lake Como. This is the fastest route at about 3.5 hours.

The second fastest option would be to travel by train. From Sicily to Milan, the train ride is about 13 hours, and then transferring to another train to Lake Como which takes about an hour.

The slowest mode of travel from one region to the other would be by car, which takes about 15 hours. While you could potentially drive straight through from Sicily to the Lakes region, it makes sense to overnight in one of the many cities along the way to break up the trip and explore more of the countryside.

While in Sicily, this three-day tour can be a fun way to discover both Palermo and Catania, with visits to wineries and coastal resorts. The lakes region has a wealth of history alongside beautiful scenery, and this tour of Milan and the Lakes Region will show you some of the top highlights, with day tours of Milan and visits to the town of Bellagio, as well as the Dolomite mountains.

By Plane and Rental Car/Private Transfer

Flying from Palermo to Milan takes about 1.5 hours and from Catania to Milan it’s about two hours. Both cities have several nonstop flights a day. From Milan, the drive to Lake Como is approximately one hour, depending on traffic. You can rent a car if you prefer to make the drive yourself, or hire a private driver through one of the many companies available in the city.

The train ride starts in either Catania or Palermo to Milan, with the train from Catania taking about 13 hours and from Palermo about 14 hours. Both routes involve a ferry transfer in which the train car is loaded onto the ferry and transported from Sicily to the mainland. When you arrive in Milan, you can easily hop one of the several daily trains that travel between Milan and Lake Como for a quick 30-minute ride. You can also take the train from Milan to the Lake Garda or Lake Maggiore regions, both of which take about 1.5 hours.

Driving from Sicily to the Lakes District can take upwards of 15 hours. While it is the longest route between the two regions, it is also one of the most picturesque and provides a unique opportunity to see more of Italy. From Catania, you’ll take the A18 and then transfer via ferry at Villa San Giovanni-Messina, connecting to the E45 and then the SS340 to Lake Como. If you leave from Palermo, which adds about an hour to the drive, you’ll take the E90 and A20 to the ferry transfer, then take the E45 and SS340.

The town of Salerno is right along the way and at about seven hours from Sicily, a good place to overnight. A bit off the beaten path from nearby Naples, Salerno has historical sites such as the Salerno Cathedral, as well as the beautiful coastal promenade, Trieste Lungomare.