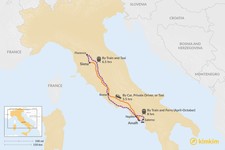 Siena and Amalfi are popular Italian destinations, so there are several ways to make the 300-mile (480 km) trip between the two cities. While driving from Siena to Amalfi is usually the quickest option, taking the train is almost as fast. If you want the fun of approaching Amalfi from the sea, you can take the train to Salerno and transfer to a ferry.

Bus travel is not a good option; departures are infrequent and inconvenient, and it takes longer to get from Siena to Amalfi by bus than by car or train. Flying from Siena to Amalfi is also not recommended. Because neither Siena nor Amalfi has its own airport, you would still need to use ground transportation for part of the trip; traveling by car, private driver, or train takes much less time.

There are plenty of enticing places to stop on your journey from Siena to Amalfi. If time permits, you can detour to Orvieto, with its stunning cathedral, or spend some time seeing the sights of Rome. Along the A1/E35 toll highway, consider stopping at the ancient Roman amphitheater in Santa Maria Capua Vetere, near Capua. This amphitheater is the second-largest Roman amphitheater in Italy, and its gladiator school was famous throughout the Roman Empire. Vietri sul Mare, on the Sorrento Peninsula, is known for its colorful ceramics and magnificent views.

By Car, Private Driver, or Taxi

Duration: 5.5 hours, depending on traffic

Traveling by car from Siena to Amalfi allows you to stop along the way to sightsee and stretch your legs. If you plan to visit Santa Maria Capua Vetere's Roman amphitheater, this trip is best made by car, or better yet, by private driver.

The journey itself is straightforward. Take the A1/E35 and A30/E841 toll highways to Nocera Inferiore, cut through the town and take the A3/E45 toll highway and Strada Statale 163 (SS163) to Amalfi. Along the way, watch for fixed speed cameras and average speed cameras. In cities and towns, including Siena, Nocera Inferiore, and Amalfi, be careful not to drive into the Zona a Traffico Limitado (ZTL), the limited traffic zone that is for permitted local drivers only. If you accidentally stray into the ZTL, you will be ticketed.

You may encounter traffic jams while driving on the A1/E35 toll highway, particularly near big cities and along the Amalfi Coast. The SS163 is steep and winding in stretches. Take your time and watch for cyclists.

By Train and Taxi

To get from Siena to Amalfi on a fast Trenitalia Frecce or Italotreno train, you must transfer twice. Your first transfer will be at Santa Maria Novella Station in Florence. Your second transfer will be between Napoli Centrale station in Naples and Piazza Garibaldi Station, which is below and adjacent to Napoli Centrale, to take the EAV train to Nocera Inferiore. Simply walk downstairs to the EAV ticket office and platforms.

The quickest and easiest way to get from Nocera Inferiore to Amalfi is by taxi. Relax and enjoy the views and let your driver worry about the traffic.

By Train and Ferry (April through October only)

While it takes longer to get from Siena to Amalfi by train and ferry, the views from the sea might just be worth the extra time. Take a Trenitalia train to Florence's Santa Maria Novella station, then change trains and travel to Salerno. Take a taxi or bus to the ferry port at Piazza della Concordia. Travelmar offers several departures per day to Amalfi during peak season (July and August); ferries are available from April through October, although departures are less frequent. Alicost offers one early-morning departure per day from Salerno's Molo Manfredi port, April through October.

Discover the incomparable culture of Southern Italy with a trip...

This fast-paced trip combines the highlights of Rome with the bustling...

Victoria M.
Kentucky, United States
"Marcello was our local guide and he was just amazing. We had the best trip - everything we saw and did was great. It was a nice variety and we felt we got to..." read more
Traveled to Italy solo in April, 2022

Melissa D.
Virginia, United States
"This trip was beyond expectations. Every detail was considered and the places visited were amazing. In Venice, Bologna, and Rome we began our first day wit..." read more
Traveled to Italy as a group in July, 2022
Plan your trip to Italy
Customize your trip with help from a local travel specialist
Plan Your Trip