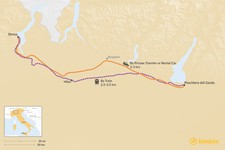 When you're ready to depart Stresa, on the shores of Lake Maggiore (Lago Maggiore) and head to Peschiera del Garda at Lake Garda (Lago di Garda), there are two ways to make the roughly 150-mile (240 km) journey—driving a car or taking trains. Driving is the fastest option (about 2.5 hours with no stops), but taking the train is only slightly slower. Either way, it's a very scenic journey.

When planning your trip, be sure to check out this article on Italian Lakes, including Maggiore and Garda. This exciting 15-day itinerary exploring Milan and Italy's Lakes Region includes overnights in Stresa and Peschiera del Garda. Since both train and car travel between Stresa and Peschiera del Garda take you near Milan, consider a side trip to explore Northern Italy, with Milan as your base.

Driving a car takes up to three hours without stops, and you may want to consider a private transfer to enjoy the beautiful lake scenery along the route. Leaving Stresa, enjoy the scenic drive south on the SP33, with views of Lake Maggiore on your left. At the Castaletto/Ticino interchange, you'll pick up the E62/A8 highway, also signposted as the Autostrada del Laghi. This section of the drive is about 50 miles (81 km).

Once you reach the outskirts of Milan, pick up the A4/Torino - Trieste Autostrada, also signposted as E64. As the A4 passes just south of Brescia, it also becomes the E70, so don't be worry that you're on the wrong highway. Continue on the A4/E70 until the exit marked Peschiera, where you'll pick up the SR249 to Peschiera del Garda. The portion of the drive on the A4 to your final destination is 85 miles (136 km).

Trenitalia, Italy's national rail service, offers several trains a day from Stresa to Milano Centrale station in Milan. This portion of the journey takes 1 hr, 16 minutes on a Regionale train or 57 minutes on a Eurocity train, which run less frequently. At Milano Centrale, transfer to either a Frecciarossa high-speed train or a slower, cheaper Regionale train. Frecciarossa trains make the journey to Peschiera del Garda in 57 minutes, while Regionale trains take 1 hr, 32 minutes.

Peschiera del Garda's train station is about half a mile (1 km) from the center of town. You can walk, or take a taxi from the station.

Mountains and Lakes in Northern Italy: The Dolomites, Lak...

Spend 15 days traveling through the dramatic Dolomites in Northern Italy...

Slow down as you explore charming Lake Garda and its picturesque towns...

From Tuscany to Veneto to the Italian Riviera, this 12-day itinerary is...

If spending eight days soaking in the sunshine and views of Italy's...