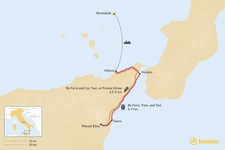 If you travel from the island of Stromboli to view or climb Mount Etna, Sicily's largest volcano, you will make the first part of your journey by boat. Year-round ferries connect Stromboli and Milazzo, with stops at some of the Aeolian Islands, including Salina, Vulcano, and Lipari. During the summer months, you can also take a Liberty Lines ferry to Messina Marittima.

As you head toward Mount Etna, consider visiting one or more of the Aeolian Islands, perhaps on a 9-day Volcanoes of Italy itinerary. Salina is known for its food and wine, Lipari is famous for its beaches and is home to Sicily's largest castle, and Vulcano, as its name suggests, features a volcano, black sand beaches, and mud baths. Other recommended stops include Taormina's delightful beaches and well-preserved Greek ruins and the archaeological park and museum in Naxos, the oldest Greek colony on the island of Sicily.

By Ferry, Train, and Taxi

Caronte & Tourist and NGI ferries ply the waters between Stromboli, Salina, Vulcano, Lipari, and Milazzo year-round. The ferry trip takes about five and a half hours. Liberty Lines hydrofoil ferries, which are faster and more expensive, are also available throughout the year. In high season (late June through August), there are five or six departures per day; in low season, four ferries per day connect Stromboli and Milazzo. Your hydrofoil ferry voyage will take about three hours.

In Milazzo, you must take a taxi or bus from the port to the train station. (Buses to the train station do not run on Sundays.) Trenitalia trains run frequently between Milazzo and Giarre-Riposto. You will need to change trains at Messina Centrale. The easiest way to get from Giarre-Riposto Station to Mount Etna is by taxi, although you could certainly rent a car in Giarre if you prefer to drive yourself. This leg of your journey will take about 40 minutes, depending on traffic.

During the summer months, you have the option to take a ferry from Stromboli to Messina Marittima instead of Milazzo. Liberty Lines offers two departures daily. When you arrive at Messina Marittima, you can walk or take a bus or taxi to Messina Centrale Station. From there, Trenitalia offers several departures daily to Giarre-Riposto. Taking the ferry from Stromboli to Messina will shave about an hour and a half off your total travel time.

By Ferry and Car, Taxi, or Private Driver

Duration: 3.5-5 hours, depending on ferry route and traffic

As described above, ferries from Stromboli to Milazzo run all year, and additional ferries connect Stromboli and Messina Marittima during the high travel season (late June through the end of August). If you plan to drive from Milazzo to Mount Etna, your 81-mile (131 km) journey will take about two hours unless you encounter traffic. To minimize traffic impacts, try to leave Milazzo in the mid-afternoon. Take the A20/E90 toll highway to the A18/E45, and continue to Giarre via Strada Provinciale 118 (SP118), SP152, SP59-I, and SP92.

Cliff diving is the national pastime in Sicily, and it's easy to see why...

Ashley C.
Missouri, United States
"We could not have asked for a better trip. Kimkim organized the perfect accommodations, sight visits and it was a breeze getting between each location. Our..." read more
Traveled to Italy as a family in September, 2022

Leah P.
Michigan, United States
"Harris was wonderful to plan with, and he and Evyenia were there anytime we needed them during the trip! All of our guides were amazing during the trips as w..." read more
Traveled to Italy as a couple in September, 2022

Carol P.
Virginia, United States
"Our trip was wonderful from start to finish. Monica and Sonia were very responsive and helped us pick the best itinerary for us. We also added a 5th traveler..." read more
Traveled to Italy as a family in June, 2022
S
Suzanne L.
Florida, United States
"Although he was not our original planner, Chris hopped right in and did a wonderful job of creating our Italian adventure. He communicated with us from the ..." read more
Traveled to Italy as a couple in August, 2022
Create your custom-made trip to Italy
Get Started